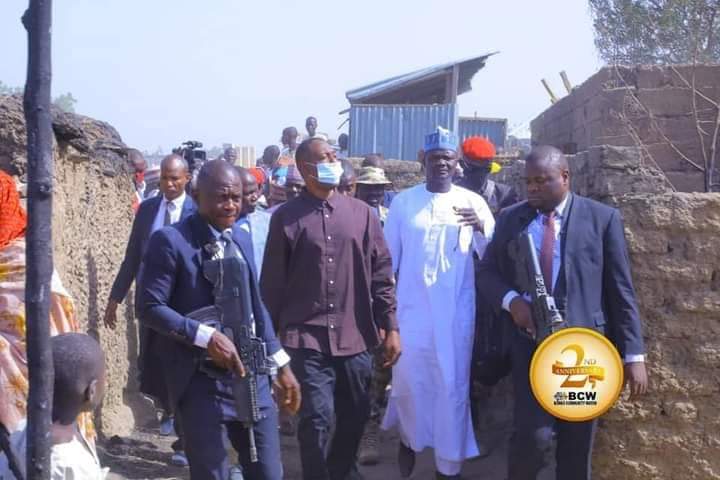 Governor of Borno State, Prof. Babagana Umara Zulum, mni FNSE has visited Dikwa town which was recently occupied for several days by Boko Haram insurgents to sympathise with the people and assess the damage done to the town. The terrorists razed the town to ashes and kidnapped humanitarian workers before voluntarily withdrawing.

The governor saw for himself the destruction by the insurgents namely the palace of the Shehu of Dikwa, Nigerian Army’s 81 DIV , TF BN NASC 9 Headquarters, 22 Armored Brigade headquarters, UN Humanitarian Hub, Primary Healthcare Centre and IDP camps. All in Dikwa.

The Governor ordered the Ministry of Reconstruction, Rehabilitation and Resettlement to rehabilitate all destroyed properties, including those belonging to the military.

He consoled families affected by the attack, and charged all residents to cooperate with the security operatives by reporting suspicious movements at all times.

Bags of rice donated by the governor to the residents a week earlier were set ablaze by the insurgents who also burnt the local government headquarters and some military vehicles seen in pictures below.
After joining residents for Friday’s congregational prayers, Zulum delivered President Muhammadu Buhari’s assurances to the people.

“I had a meeting with Mr. President on Tuesday, he has given me assurance that steps are being deployed to ensure your safety. I urge you to be patient and resilient, we are aware of the very difficult conditions you find yourselves and we are in this together, we are not resting. We are doing whatever we can and insha’Allah, we will achieve our aim” Zulum said.

The Nigerian army had claimed it repelled the attempt by Boko Haram to infiltrate the town, but the destruction of the town and the complete destruction of the military formations in the town shows that the military’s account is difficult to believe. Indeed, a prominent son of Dikwa, Prof Khalifa Dikwa went on television to accuse the army of outright falsehood.