Five Things At Stake As The English Premier League Returns 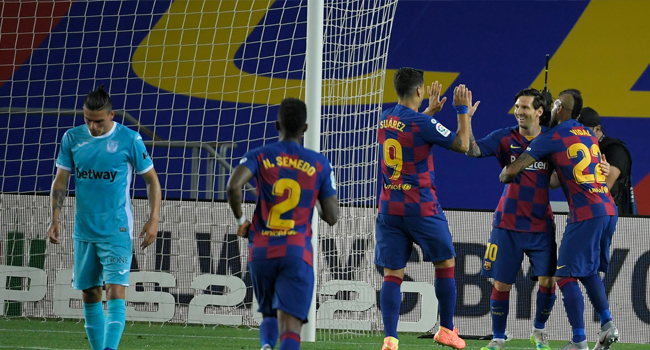 The English Premier League will resume on Wednesday following over three months of non-action due to the coronavirus pandemic ravaging the world.

Arsenal manager, Mikel Arteta, and Chelsea’s Callum Hudson-Odoi were among those who first tested positive to COVID-19, prompting the stoppage of matches.

Before it went on the compulsory and unplanned break, 29 rounds of matches had been played with nine more yet to be decided with the readjusted calendar meaning the league will end on July 26th.

The Premier League has welcomed the announcement today by the Government permitting the return of competitive sport in England under strict conditions from 1 June#PL statement 👉 https://t.co/RYEsxGyHjh pic.twitter.com/fYUFPiFwsz

Football authorities have put several safety measures in place ahead of the Premier League restart.

Before the resumption date was confirmed, clubs had resumed training with players doing so in pairs of two until there was a go-ahead for full-fledged practices.

Also, players and coaching staff were tested for the virus and as football returns in the English topflight, social distancing rules will be maintained as much as possible.

FIFA had given the nod for five substitutions instead of three, fans will not be allowed to watch their teams in the stadia and goal celebrations would be minimized equally as one of the most followed leagues in the world restarts.

🖐 Managers can now make use of five substitutes during a match

🔄 Teams can now have nine players on the bench, but the manager can only make substitutions on three occasions, not including at half-time

🏃‍♂️ Only three substitutes from one team are allowed to warm up at one time pic.twitter.com/JfYHhzMjWQ

The resumption of the games will rekindle not just rivalries as there are a lot of things up for grabs.

Who Gets Crowned As Kings Of English Football?

Merseyside outfit Liverpool were on the cusp of a first domestic league crown in 30 years before the coronavirus-induced break. They were on 82 points having played 29 matches.

The resumption of football, however, means they can now wrap up an impressive campaign that has seen them lose and draw one match each; amassing 82 points.

Jurgen Klopp’s charges are just two matches away from being declared winners of the 2019/2020 season.

The celebrations can, however, come faster if Arsenal are able to beat Pep Guardiola’s second-placed Manchester City (57 points) on Wednesday and the Reds win their match against Everton.

👀 A reminder ahead of Matchweek 30… pic.twitter.com/xbon7o9fFl

Aside from contending for the EPL crown, the 2018/2019 UEFA Champions League winners will be looking to break City’s record of 100 points in a single term.

Guardiola’s men created that record when they won the Premier League in the 2017/2018 term.

Liverpool will need 18 points to equal that milestone with just nine rounds of fixtures to be played.

They could also better City’s 19 points winning margin created in the 2017/18 season.

The restart of the EPL will not just rekindle some of the most intense rivalries in football; players alike will be gunning for personal accolades one of which is the top scorer’s gong.

England striker, Jamie Vardy has been flourishing under the tutelage of coach Brendan Rodgers and that has seen him leading the top scorer’s chart with 19 goals from 26 games for the Foxes.

A first for Jamie Vardy or a hat-trick for Mo Salah?

He is closely followed by Arsenal’s Gabonese forward, Pierre-Emerick Aubameyang who has struck 17 times in 26 matches for Mikel Arteta’s side.

The former Borussia Dortmund man was awarded the prize in the previous season alongside Mohamed Salah and Sadio Mane.

Manchester City’s Sergio Aguero and Salah of Liverpool are breathing down their necks with 16 goals each.

The race for Champions League spot in the Premier League is fierce.  Pep Guardiola’s City have been banned from taking part in the Champions League for the next two campaigns for breaching Financial Fair Play rules.

The club has launched an appeal for a reversal and unless this is successful, they will have to relinquish their Champions League spot to the fifth-place side.

Leicester City look secured in third place with 53 points, five above Frank Lampard’s Chelsea who are fourth on the log.

But the spot for fourth place looks within reach for many teams and even Arsenal who are ninth on the table having played 28 games with 40 points to show for it.

United who were on a five-game unbeaten streak before the forcefully break are lurking around to overtake Chelsea who occupy the precious Champions League spot.

They are just three points (45) of the Blues but will have to also contend with surprise packages  – Wolves and Sheffield United – who they lead by two points.

Although Tottenham, in eighth and Arsenal in ninth and are eight points away from the fourth position with a game in hand, will also fancy their chances of returning to Europe’s elite club competition.

The Gunners have missed the tournament since the 2016/2017 season and will face a stiff test when they visit the Etihad Stadium in their first game back after the break.

Bottom Battle: The Quest For Survival

While other teams are battling for European places at the top of the table, it is a fight for survival for the Bottom teams.

China said Wednesday it wanted to avoid more clashes in a border dispute with India that resulted in the first deadly confrontation between the two nuclear powers in decades.

“We of course don’t wish to see more clashes,” foreign ministry spokesman Zhao Lijian said at a regular press conference, while urging India to avoid “provocative gestures” that could complicate the border situation.

Norwich City are rock bottom with 21 points from 29 matches, six points below safety and will need a miracle to stay in the top flight next season.

West Ham, Watford, and Bournemouth are all on 27 points and on the 16th, 17th, and 18th positions respectively.

This means there is still a lot to be fought for and a win would make all the difference for any of the teams.

Among the bottom five sides, Aston Villa appear to have the advantage to reset their poor run of forms.

They have a game in hand and a win could catapult them off the relegation zone after their poor run of four back-to-back defeats.

Although the odds looked against them late last year, Watford’s surprising 3-0 victory over Liverpool, in March, which was their fourth win in five games, may well be the revival they need for survival.

It’s not all about the strikers as the Premier League returns. Liverpool’s Alisson Becker and Kasper Schmeichel of Leicester City, among others, will battle for the Golden Gloves.