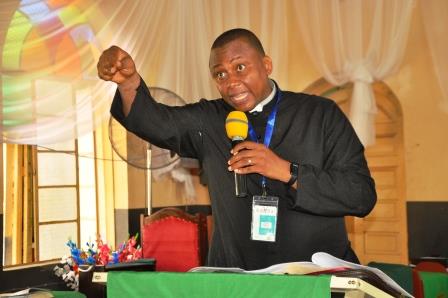 Christians have been charged to embrace holy living so that they done not fall out of favour with God and incur the wrath of God in their lives.

This was the position of Ven. Ifeanyi Aniagboso who was the Bible study facilitator at the ongoing third session of the fourth synod of the Anglican Diocese of Amichi at Ebenezer Church, Unubi in Nnewi South LGA of Anambra State.

“Christianity has principles. These principles do not choose location or age. If you are 80 years of age and you give your life to Christ, irrespective of your age, you are still a baby Christian. Your age does not give you anything extra.”

He said that people often take for granted the grace of God or the forbearance of the almighty God in vain noting that many believers often forget the circumstances of our salvation and the cost of our acceptance in God through Christ Jesus.

This he said was the background of Paul’s charge to the church in Rome in Rom.12:1-2 not to conform to the world. Citing Bakers Evangelical online dictionary, “the meaning of the word ‘world’ includes the people of the world who are indifferent or hostile to God, full of corruption and stands as a symbol of corruption.”

Ven. Aniagboso outlined physical pleasure, lust of the flesh, greedy longings of the mind, assurance in one’s own resources as some of the things Christians are charged not to conform to in this world.

He said it is greedy longings that make people not to be satisfied with what God has made them. Speaking directly to the clergy, Ven. Aniagboso cautioned on contentment warning that clergymen who are not satisfied with where God has kept them will eventually make a shipwreck of their ministry.

In the interactive session that followed, contributors were in agreement that greed and worldly emulation are the bane of today’s society. Christians were advised to humbly accept whatever God has given to them and be thankful for where they are.

In conclusion, Ven. Aniagboso said that “Conformity with the world is enmity with God. We must be aware of these worldly standards and flee from every appearance of them. If anyone has fallen away from God, he or she has the opportunity now to hurriedly repent and return to the Lord.”