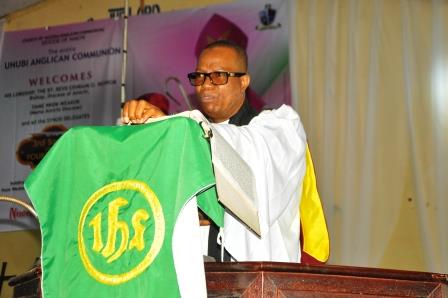 Christians have been called upon to shun scheming to achieve their goals in life.

This call was made by Ven. Prof. Pic Onwochei who is the guest preacher at the ongoing third session of the fourth synod of the Anglican Diocese of Amichi.

In his exposition on the synod theme “Do not be conformed to this world…,” Prof. Onwochei said that some people have rested their lives on schemes and craft instead of trusting and obeying God to lead and prosper them. He condemned the attitude of some clergymen who scheme for positions and blackmail fellow clergymen; pull them down to get what they want.

He used the life of Jacob to illustrate God’s demand on his children. He described Jacob as a schemer who waited for the right opportunity to exploit the weakness of his brother Esau.

“This was the man he struggled with right from the womb. He was always scheming for everything. Bethel was the first place Jacob encountered God as he ran away from home after cheating his brother Esau. But there was something critical he missed in that encounter. Jacob trusted more on his ability to scheme his way through rather than trust God to perfect his plans.”

“Sin will take you longer than you need to, keep you longer than you need to stay and cost you more than you will need to pay. Jacob was hasty to negotiate with Laban without praying. He volunteered seven precious years of his life to get a wife. He did not even pray on his wedding night, he had no conversation with his new bride but only discovered he slept with the wrong lady. It cost him another seven years.”

Prof. Onwochei said it took God’s intervention to rescue Jacob from another round of servitude in the house of Laban. God demanded not just that he breaks from Laban but that he goes back to dwell in Bethel.

“God said to him, go back to Bethel and dwell there and make an altar for me. To do that, Jacob needed to take away all the foreign gods, change his garments and washed himself. Many Christians visit Bethel instead of living there.”

He challenged Christians to rebuild the altar of their relationship with God just as Jacob did. He remarked that it was Jacob’s obedience in returning to Bethel that guaranteed he attained the full potentials of his destiny before death.

Prof. Onwochei made a passionate call to all delegates and participants in the synod to return from wherever they have strayed from God’s presence before it is too late.