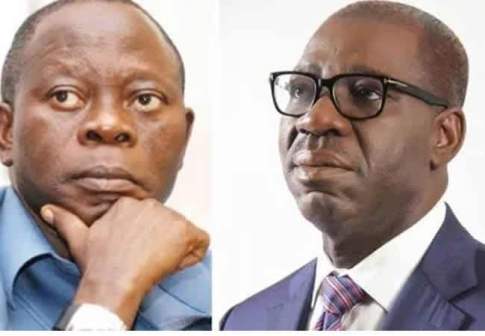 The suspended national chairman of the All Progressives Congress (APC), Comrade Adams Oshiomhole, had a reprieve at the weekend following the lifting of his suspension by his Ward 10 in Estako West Local Government Area of Edo State, a development that technically altered the subsisting political calculations in the state.

But a factional chairman of APC in Etsako West Ward 10, Mr. Oshawo Stephen, dismissed the lifting of Oshiomhole’s suspension and insisted the ward executive members stood by their decision to suspend him.
The dramatic turn of events came as the national leadership of APC announced, also at the weekend, that the South-south zone had replaced its Deputy National Secretary, Chief Victor Giadom, with Mr. Worgu Boms, a former Attorney General and Commissioner for Justice in Rivers State in the wake of the crisis plaguing the party.

Similarly, the North-east National Vice Chairman of the party, Comrade Salihu Mustapha, applied to a High Court in the Federal Capital Territory (FCT) to strike out the order making him Acting National Secretary. He said the move was in total submission to the supremacy of the North-east caucus of the APC.

Meanwhile, the Independent National Electoral Commission (INEC) said it planned to take briefing from its Election and Party Monitoring Department and the Legal Services Department for proper interpretations of the various court rulings on the crisis besetting the party.

The recent suspension of Oshiomhole by the order of a Federal High Court in Abuja, now upheld by the Court of Appeal, had exacerbated the leadership crisis in the governing party.

But Secretary of Ward 10, Estako West, Mr. Emuakemeh Sule, said at a press conference on Saturday, after a meeting of the ward executive members and the APC National Working Committee (NWC), that the suspension was lifted because it lacked merit.

Sule stated that the resolution of Ward 10 executive members to lift Oshiomhole’s suspension was reached at a meeting held on June 4 at the APC secretariat, Apana-Uzairue, Edo State.

According to Sule, “We have reviewed the circumstances leading to the suspension of Comrade Adams Oshiomhole and found no merit in the allegation or processes employed.

“We hereby lift the suspension placed on Comrade Adams Oshiomhole by the ward. We call on all organs of our great party to restore all rights and privileges of membership to Comrade Adams Oshiomhole.”
Sule stressed that the resolution was adopted and signed by the Vice Chairman, Adizetu Jafaru; Assistant Secretary, Angela Egherua; Financial Secretary, Imokhai Patrick; and Alufah Paul, among others.

However, refuting the announcement, Stephen, in a statement, said the ward executive members, who were elected into office in 2018, remained intact and had not been displaced by anybody. He described the claims about lifting of the suspension as a charade.

Stephen stated, “The suspension of Comrade Adams Oshiomhole by the ward executives remains valid. The statements to the contrary in the media are false and should be disregarded. We stand by our decision and have no reservation on the action as it is in the best interest of the party.

“The ward executives as well as our counterparts at the Etsako West local government level stand by the suspension of Comrade Oshiomhole for his divisive role in the crisis rocking the APC in Edo State.”

Chairman of APC in Etsako West Local Government Area, Ezolomhe Rabiat, also affirmed that the council executives were still members of the party in the state and stood by the suspension of Comrade Oshiomhole.
But the acting national chairman and National Vice Chairman, South-south, Mr. Hilliard Etta, confirmed that the NWC had received the resolution of the Etsako West Ward 10, adding that 17 out of 27 members signed the resolution.

Etta said, “Let me also say that in matters of this nature, our constitution provides for only a simple majority and 17 out of 27 is indeed more than a simple majority. So, we want to use this opportunity to thank Etsako West Ward 10 for what they have done. History will be on your side.

“I am also in receipt of the acceptance and ratification of that resolution by the Etsako West LGA executive dated the 9th of June 2020 and signed by the Chairman, Alhaji Abubakar Akokia, and the Secretary, Hon. Dauda Ahmed.”

Etta stated that he also received the ratification by the State Executive Committee (SWC) of the APC in Edo State, signed by the acting state chairman, Col. David Imuse (rtd), and State Secretary, Lawrence Oka.
He recalled that on Friday, a court of competent jurisdiction had asked the Deputy National Secretary, Chief Victor Giadom, to restrain himself as a member of the NWC and should never parade himself as such.
He noted that before then, there was a resolution by the NWC asking the South-south zone of the party to transmit a name for Giadom’s replacement or filling of the vacancy created by his resignation to contest as deputy governorship candidate of the party in Rivers State.

The acting national chairman stated, “I want to announce to the world that I am in receipt of the name of a distinguished member of this party from Rivers State to the zone for ratification in the person of Worgu Boms, a former Attorney General of Rivers State.

“His name has been transmitted to my good office and I want to announce that in the earliest time possible, the South-south zonal executive committee will meet and ratify that name and send same to the NWC of our great party.”

Following the lifting of Oshiomhole’s suspension at the ward level, the coast is now clear for him to approach the court to seek the reversal of the suspension imposed on him from acting as National Chairman within the next 7 days. It is uncertain if he can achieve this. If he does, the leadership crisis is automatically resolved. Failure to get the court to lift that suspension will put the ruling party in a precarious situation that may see a repeat of the Zamfara and Rivers scenarios.

As things stand now, with the injunction against Giadom, the APC no longer has a leader recognised by law and may be unable to field candidates for all coming elections, which in the immediate includes the Edo and Ondo states governorship elections.

The Zamfara and Rivers states scenario looms again for the APC, and with incumbent governor Godwin Obaseki now in the PDP, he is looking good to coast home to victory unchallenged if the APC fails to put its house in order quickly.

In the North-east, National Vice Chairman of the party, Comrade Salihu Mustapha, applied to the Federal Capital Territory (FCT) High Court to strike out the order making him Acting National Secretary of the party.

The High Court sitting in Maitama and presided over by Justice S.U. Bature had last week issued an order that Mustapha should be allowed to carry out the functions of Acting National Secretary of the party.
He said the North-east stakeholders, including the Senate President, Ahmed Lawan, Secretary to the Government of the Federation (SGF), Boss Mustapha, and all APC governors and members of the National Assembly from the zone, met and endorsed Waziri Bulama’s nomination for National Secretary and forward same to NEC for ratification.

Etta said it was mischievous for anybody to claim that he was not aware of the suite at the FCT High Court purporting to make him the Acting National Secretary, but said he discontinued the suit because his zone had resolved on the nomination of Bulama.

Speaking with journalists yesterday in Abuja, Mustapha said he had directed that the suit and order making him Acting National Secretary of APC should be struck out.

He added, “I was part of the North-east APC stakeholders that met and endorsed the nomination of Arc Bulama and cannot go to court to seek for such position again.

“We the North-east APC believe in the competence of Arc. Bulama and have appointed him into the position waiting for his ratification by the National Executive Committee (NEC) of the party. I am striking out the suit entered in March, because I believe that the issue has been resolved and for the interest and peace of the party.

“But as we speak, we are making all arrangements with my lawyers to seek a discontinuation and rescind the prayer we made in court, because for me, the zonal decision supersedes any other prayers pending in court. We are going to vacate that order to allow Architect Bulama’s name to be sent to NEC for ratification as the national secretary of our party.”

Mustapha called on leaders of the party to convene a NEC meeting, where all the issues challenging the unity of the party would be resolved.

INEC National Commissioner in charge of Voter Education and Information, Festus Okoye, said, “Thereafter the commission will take a position on what to do.”

He maintained that INEC would not act until it had studied the Court of Appeal order that suspended Oshiomhole as national chairman of the party.

he said, “The commission will take briefing from its Election and Party Monitoring Department and the Legal Services Department. Thereafter, the commission will take a position on what to do.”
Okoye said INEC was not involved and would not be involved in the day to day running of political parties, saying changes in leadership of political parties are a function of their constitutions, guided by the extant provisions of the Electoral Act and the Constitution of the Federal Republic of Nigeria, 1999 (as amended).

He cautioned against crisis in the political parties, some of which were threatening to prevent them from conducting their primary elections within the stipulated time, saying, “The reality is that the parties have limited time to conduct their primaries and file their nominations. The dates in the timetable and schedule of activities released by the commission will not be extended.”

According to him, the position today is that 15 political parties notified the commission of their intentions to conduct party primaries and the commission will send monitors to observe the conduct of those primaries.

THISDAY, however, gathered that the APC governors were not happy with Oshiomhole’s comments that the party would not bend its rules to accommodate Governor Godwin Obaseki of Edo State. The governors said the comments by Oshiomhole at the State House made them to move against him.

A source privy to some of the developments within the party said, “Recall that the governors of the party had said they will intervene to resolve the matter, but when Oshiomhole refused to allow the intervention of the governors after meeting with the Chief of Staff to President, Professor Ibrahim Gambari, the governors moved against him.

As a result, we gathered that the APC governors moved against Oshiomhole, when it became clear that his mind was made up and they had no option than to get him out of the way.