Edo Poll: Buhari Is ‘Excited At The Prospect’ Of Free, Fair Election – Oshiomhole 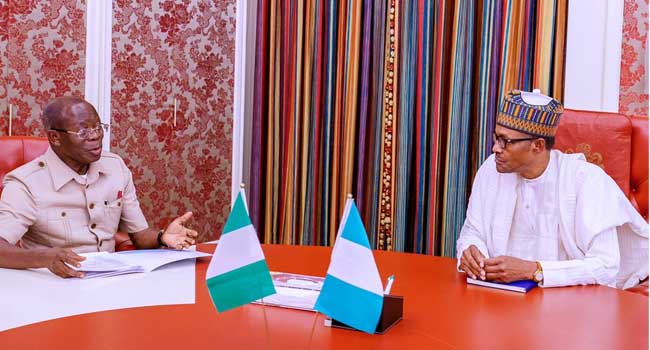 President Muhammadu Buhari has restated his commitment to a free and fair governorship election in Edo State and is “excited at the prospect.”

Former Chairman of the All Progressives Congress (APC), Adams Oshiomhole quoted President Buhari as saying this when the duo met at the Presidential Villa on Monday.

He said he also briefed the President on happenings in Edo State and quoted Buhari as saying that anyone who engages in unlawful activities before during and after the Edo polls will face the law.

“The President is excited at the prospect of having a free and fair election devoid of violence and the fact that the laws are clear; when people misuse firearms, the laws are clear as to what should be done,” the former Edo governor told reporters after the meeting.

According to Oshiomhole, President Buhari has always emphasised that the rights of voters be respected.

“His attitude is clear: Nigerian electorates, their rights must always be respected and anybody using unlawful weapons; violence to intimidate the electorate, the President will never support such causes,” he explained. “And on that, we are together.”

He added that “It does not matter the party anybody belongs to, the laws are the same.”

Oshiomhole also decried the tensed atmosphere in Edo State in the leadup to the governorship poll.

“I have run elections as the governor of Edo State three times, and there was no violence,” he added.

The ex-National Chairman of the Nigeria Labour Congress (NLC) wondered what “has changed now that the people have suddenly started talking about violence?”

The Edo governorship election is billed for September 19 with President Buhari earlier in the month endorsing the candidate of the APC for the poll, Osagie Ize-Iyamu.

Buhari had during the endorsement held at the Presidential Villa, presented the symbolic party flag to Ize-Iyamu at a closed-door meeting attended by his Chief of Staff, Professor Ibrahim Gambari, and some APC governors.