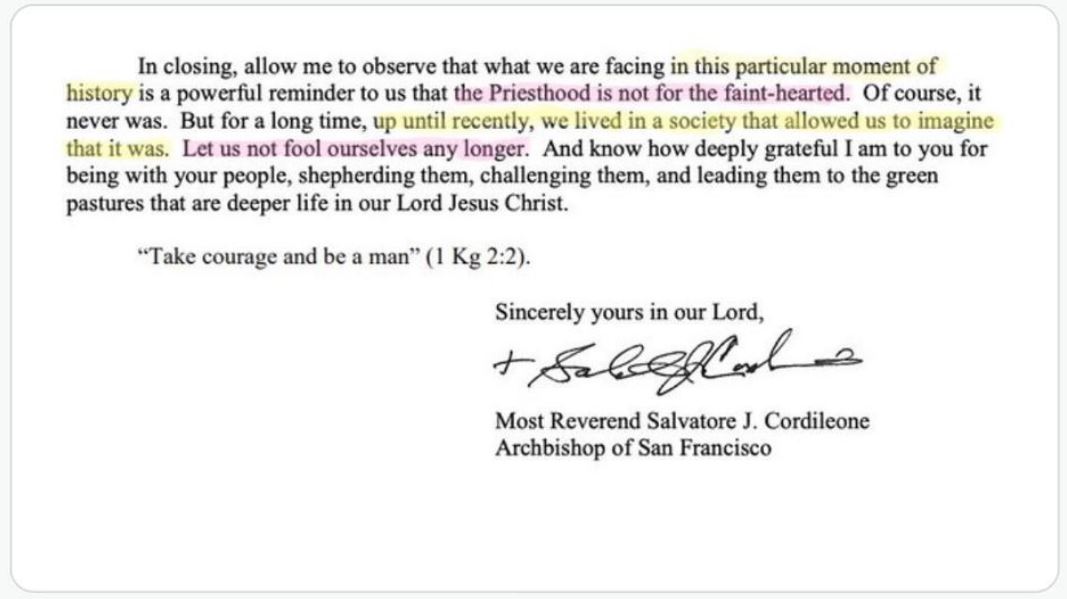 The Archbishop, while informing San Francisco priests of Pelosi’s ban from communion, reminds them that “what we are facing in this particular moment of history is a powerful reminder to us that the Priesthood is not for the faint-hearted.”

We are living in a time when spiritual warfare is growing increasingly intense.  We cannot put on clerical attire and imagine we are Bing Crosby in “The Bells of St. Mary’s.”  The priesthood is more like being Fr. Merrin in “The Exorcist.”  Of course, not all the time.  Many of our people, while fallen sinners are basically kind-hearted people.  The comparison with sheep made numerous times in the Scriptures, is apt.  They need to be cared for, nurtured, and fed.  But we cannot do that in peace unless we have first repelled the wolves that would devour them.  So most of my posts on social media aren’t written to feed the faithful, but to guide erring sheep and to repel the wolves, especially those in sheep’s clothing.

Last month, Cordileone had already warned Pelosi that should she not change her pro-abortion stance, then he would have no choice but to declare her barred from Holy Communion. Pelosi, who claims to be a ‘devout’ Catholic despite supporting legalized abortion, has not changed her stance since Cordileone’s warning.

Pelosi has been at odds with the Catholic church for over a decade, stemming from a 2008 interview in which she said that the Church has not been able to define when life begins.