COVID-19: Expects lot of death in U.S. weeks ahead – Trump 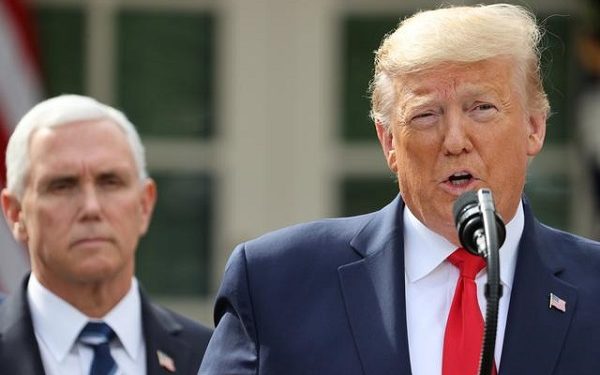 President Donald Trump told Americans to brace for a big spike in coronavirus fatalities in the coming days, as the country faces what he called the toughest two weeks of the pandemic.

“There’s going to be a lot of death,” Trump said at a briefing with newsmen on Sunday.

He pushed back on criticism that the federal government has not done enough to get ventilators that many critically ill coronavirus patients need to survive to the states.

According to him, some governors are asking for more machines than they will need.

“Fears of shortages have led to inflated requests,” Trump said of submissions his administration has received to dole out equipment from the strategic national stockpile.

The U.S. has the world’s highest number of known cases of COVID-19, the flu-like respiratory disease caused by the coronavirus.

White House medical experts have forecast that between 100,000 to 240,000 Americans could be killed in the pandemic, even if sweeping orders to stay home are followed.

“We are coming up to a time that is going to be very horrendous.

“We probably have never seen anything like these kind of numbers. Maybe during the war, during a World War One or Two or something,” Trump said at the White House.

On Saturday, Gov. Andrew Cuomo said that in the grimmest day yet for the U.S. state hit hardest by the pandemic, coronavirus-related illnesses had killed 630 people in the last 24 hours in New York State.

“The disease has now killed 3,565 people in New York and the situation is particularly worrying on Long Island, east of New York City, where the number of cases is like a fire spreading,” Cuomo told a news conference.

Health experts calculate that New York, home both to bustling Manhattan and hilly farm country stretching to the Canadian border, might be around a week away from the worst point in the health crisis which has killed about 60,000 people worldwide.

“We’re not yet at the apex, we’re getting closer. Our reading of the projections is we’re somewhere in the seven-day range.

“It’s only been 30 days since our first case, it feels like an entire lifetime,” Cuomo said.

New York City alone accounted for over a quarter of the U.S. coronavirus deaths tallied by Johns Hopkins University.

Hospitals and morgues in the city are struggling to treat the desperately ill and bury the dead.

Because of the risk of infection, many people with critically ill relatives in New York City are unable to see their loved ones in their final hours.

A resident at New York-Presbyterian hospital said he and his colleagues have made several death notification phone calls every shift this week.

“There’s something sort of unquantifiably painful about telling a family their loved one died without letting them see them,” he said.

The emergency stockpile of medical equipment maintained by the U.S. government has nearly run out of protective garb for doctors and nurses.