CAN Warns As AGF Vows To Try Adeboye, VIP Offenders Based On Twitter Ban Violation 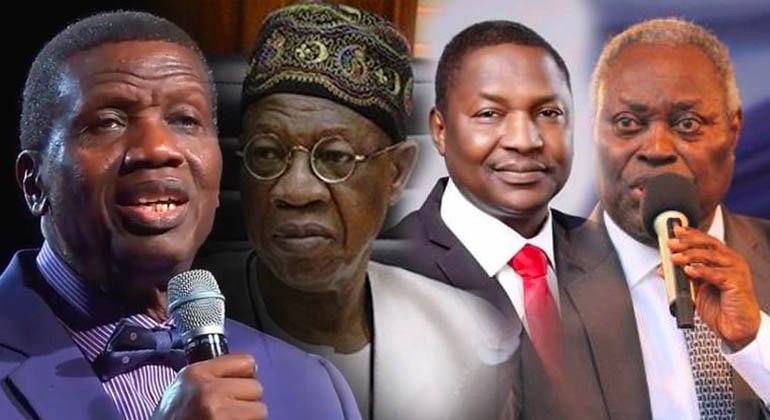 The Federal Government on Tuesday insisted that all those violating the suspension order it placed on the operations of the micro-blogging and social media platform, Twitter would be prosecuted.

The Special Assistant on Media and Public Relations to the Attorney General of the Federation and Minister of Justice, Umar  Gwandu,  stated this in an interview with one of our correspondents.

But the Christian Association of Nigeria warned government against arresting and prosecuting  Twitter ban violators, particularly clerics whose tweets were meant for their church members worldwide.

Recall that the Minister of Information and Culture, Lai Mohammed, had in statement on Friday by his spokesman, Segun Adeyemi, announced the suspension.

Amidst the public outcry and criticism that followed the government’s decision, the AGF, Abubakar Malami, on Saturday directed the Director of Public Prosecution in his office to begin the process of prosecuting violators of the government’s suspension order.

Many senior lawyers have faulted Malami’s position, saying Nigerians cannot be prosecuted for an offence that is not known to the nation’s law.

Despite the prosecution order, many prominent Nigerians have continued using Twitter openly, daring the police to arrest them and the Office of the AGF to prosecute them.

The governor tweeted, “The ban on Twitter is not only illegal, but it is also an ill-advised move to divert the attention of Nigerians from the FG’s failure to tackle insecurity in parts of the country.

“It amounts to suppression of fundamental human rights and gagging of social media.”

Recall that his Kaduna State counterpart, Nasir El-Rufai, tweeted on Sunday despite the ban.

On Tuesday, one of our correspondents sought to know from the AGF office what the government intended to do to those who had been violating its suspension order.

The PUNCH correspondent specifically told the AGF spokesman, Gwandu, “Despite the Twitter ban, some prominent Nigerians have been tweeting, thereby violating the ban. They include Pastor E.A. Adeboye and  Governor  El Rufai. Is the FG still going to prosecute them?,” the correspondent asked.

Gwandu, in his response, said  efforts were ongoing to ensure that all those violating the order were  prosecuted.

He, however, said it was not automatic because the process of arresting and prosecuting them would take time.

He said, “The process of arresting and prosecuting offenders takes a while. It is not automatic.

“We are definitely on it to ensure the prosecution of all violators. The hands of all stakeholders are on  deck to ensure that all those violating the Twitter ban are prosecuted.”

Reacting to the AGF spokesman’s insistence, Adebayo Oladeji, the Special Assistant on Media to the President of CAN warned the Federal Government.

He said, “We caution the Federal Government against carrying out its threats against those highly respected leaders. What they did was justified after all they run churches with global outlook and they made it clear in their position. If they (government) carry out the threat, it will only compound  problems in the country.

“Any government policy that suspends the fundamental rights of the citizens is not acceptable to us. The government should rise up to the menace of insecurity facing the country without harassing the innocent and elder statesmen.”

Ironically, the AGF, Malami  on Tuesday logged into Twitter and deactivated his account to show solidarity with the Federal Government which had suspended the social media platform.

It, however, remains unclear how Malami was able to log into his account since the Twitter URL has been suspended by all Internet service providers in the country.

However, Malami’s post received over 1,100 comments about 40 minutes later with many of his Facebook followers asking him how he accessed Twitter without using the Virtual Private Network.

Akintunde Babatunde wrote, “How were you able to deactivate Twitter without the VPN? You should be arrested.”

Shoyombo Adebisi KingDavid wrote, “Can you explain how you did that without first logging in?”

“This is evidence that you logged into Twitter today via the VPN to deactivate your account which is punishable under your unlawful law. Let us see how you will prosecute others without throwing yourself in jail,” Roy Ekwueme wrote.

The National Broadcasting Commission had on Monday ordered all television and radio stations to deactivate their Twitter accounts.

The House of Representatives on Tuesday  said it would, within 10 days, investigate the factors responsible for the Federal Government’s decision to ban Twitter.

Members of the Peoples Democratic Party in the House, however, staged a walkout in protest against the refusal by the Speaker, Femi Gbajabiamila, to grant their prayer that the ban be suspended pending the conclusion of the probe.

Gbajabiamila, in his opening address at the plenary, stated the need to hear from both sides first before a legislative action would be taken.

The PDP caucus, however, called for an immediate suspension of the ban by the government until the conclusion of the House probe.

Gbajabiamila said, “The House of Representatives recognises that Twitter, like other social media networks, is an important tool for communication and commerce in Nigeria, particularly amongst the younger generation who have used these networks for enterprise and innovation with great success.

“The House also recognises that as the social media platforms have  been  tools for good, they can also be  tools for bad actors. As such, the government has a legitimate interest in ensuring that these platforms are not used to commit vile actions against individuals and the state.”

The Speaker noted that proper role of the legislature “in circumstances like this is first to peel back the layers of the decision-making process to unravel the issues until we develop an understanding of the why and the how of executive decisions.

“We listen to the agitation of the people but we also hear from the government so that from the abundance of information, we reach the level of awareness that allows us to discharge our role dispassionately.

“It is in service of our obligations under the constitution of the Federal Republic of Nigeria and our moral duty to the Nigerian people, that the leadership of the House has decided to mandate the House committees on Communication; Justice; Information and Culture; and National Security and Intelligence to immediately commence an investigation to determine the circumstances of the decision by the Federal Government of Nigeria to suspend the operations of Twitter in Nigeria; and the legal authority for the ban on the operations of Twitter in Nigeria.”

He added the committees were mandated to invite the minister of information and culture to brief the House on the objectives of the suspension  “and to report to the House within 10 days.”

Much later, leader of the PDP caucus, Kingley Chinda, raised a point of order to make an additional prayer that the House ask the Federal Government to lift the ban pending  the House completion of  the probe.

Gbajabiamila, however, cited part of the Standing Orders of the House stating that a matter that had been concluded by the parliament could not be revisited for a debate. He, therefore, ruled Chinda out of order, a decision that did not go down well with the members of the opposition.

The Speaker’s ruling had temporarily made the chamber rowdy as Chinda insisted on making his point but was prevented  by several leaders of the House, especially the Majority Leader, Alhassan Ado-Doguwa; and Chief Whip, Mohammed Monguno.

Chinda said, “Mr Speaker, in the circumstance, for PDP members, we have agreed to continue to tweet on behalf of Nigerians. And if the Attorney-General (of the Federation) wants to…” He was interjected by those saying, “If you want to go, go.”

The leader and members of the PDP, subsequently  walked out of the chamber.

The PDP lawmakers after the walkout headed straight to the press centre where they addressed journalists to say the action was in defence of Nigerians.

In company with several other PDP members, Chinda stated that the caucus would sponsor a motion to demand an immediate suspension of the ban, expressing fears that the motion would be blocked.

Chinda also asked Malami to prosecute the PDP lawmakers instead of Nigerians who disobeyed the  ban.

After the PDP members left the chamber, a member of the All Progressives Congress, Yusuf Gagdi, alleged that the opposition lawmakers planned the protest, recalling that he earlier read about the plan on a website.

In his ruling, Gbajabiamila said, “I think we should rest this matter. It is unfortunate that seasoned parliamentarians who should know better are behaving this way. But I believe that our duty as parliamentarians is to do what is right. This matter has been forwarded to the committees, which  report back to us. That is what we are supposed to do as parliamentarians.”

On their part, the Social Economic Rights and Accountability Projects and 176 concerned Nigerians  asked the Economic Communities of West African State Court of Justice in Abuja to give  an injunction  restraining the Federal Government  from implementing  the Twitter ban.

In a tweet  on Tuesday, SERAP wrote, “ SERAP and 176 concerned Nigerians have asked the ECOWAS Court of Justice, Abuja to order an injunction restraining the government of President Buhari from implementing unlawful suspension of Twitter in Nigeria and criminalising Nigerians and other people using Twitter.

“In the suit No ECW/CCJ/APP/23/21 filed today by Solicitor to SERAP, Femi Falana SAN, we contend that ‘if this application is not urgently granted, the government will continue to arbitrarily suspend Twitter and threaten to impose punishment on Nigerians and other people.”

Also, a coalition of over 70 civil rights movement, under the aegis of the Nigeria Civil Society Situation Room on Tuesday, criticised the ban.

The NCSSR made its position known in a statement by three of its conveners, Ene Obi, Asma’u Joda and James Ugochukwu.

The statement reads, “The government’s ban of the app for deleting a post made by President Muhammadu Buhari for contravening its rules, indicates the administration’s high level of intolerance for criticism and divergent views.”