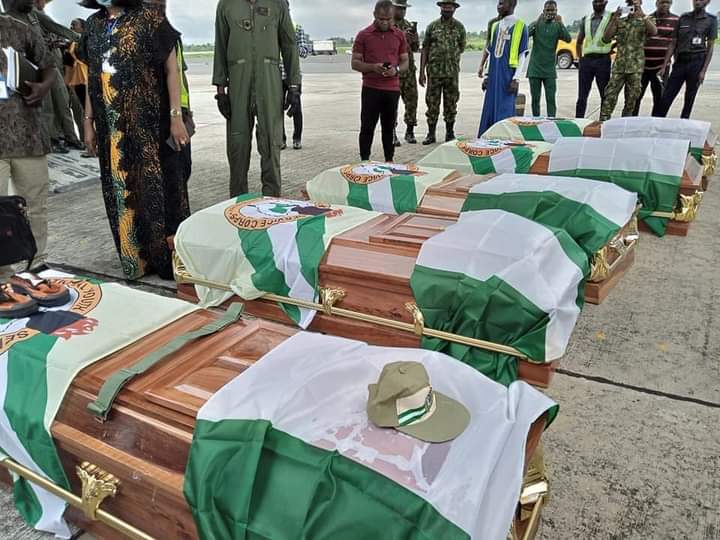 The remains of the corps members were transported from Abuja in a military aircraft, drawing angry reactions from Nigerians.

The bodies of five prospective National Youth Service Corps (NYSC) members who died in a road accident have been returned to Uyo, Akwa Ibom State.

The remains were transported from Abuja in a military aircraft, drawing angry reactions from Nigerians.

Their remains were ferried home in a C-130 Nigerian Air Force aircraft which landed at the Victor Attah International Airport, Uyo, Akwa Ibom State, on Wednesday.

The after-death heroic treatment done to the graduates angered some Nigerians who went on social media to vent their anger on the country’s leaders.

Some of them expressed shock that the bodies of the young graduates who died in a road accident were airlifted home – when the government could not provide air ticket for them when they were alive.

“Dying by road, transported to be buried by aircraft.

“Oh God deliver us from hypocrisy of this nation. May their souls rest in peace.”

For Womi Iwara, “There respect the death than the living, those people may not have tested aircraft before but now that they are death there are coming back with aircraft, wicked world, honoring them as if after service there would have been job for them, rest in peace my fellow hustling Nigerians.”

Emem Okon said, “Why didn’t they put them in the aircraft to the camp.

“Nigerian leader’s God will judge some of you since you all have the abilities to do good and help but u refuse.

“I pray God comfort their families and Friends.”

For Everest William, “The same aircraft that they won’t use to convey them, when they are going for service.

“Now that they’re dead, that’s when they consider them worthy of been flown in an aircraft.

“Is this not medicine after death?

“Is this not eye service & hypocrisy in the highest order?”

The bus carrying the young graduates was travelling at night from Uyo, Nigeria’s South-south, to Katsina, in the North-west region, when the accident occurred along Abuja-Abaji-Kwali Expressway last Wednesday around 4 a.m.

Four of the victims were from Akwa Ibom State, while one was from Imo State.

Two of the deceased, Innocent Ukpere and Victor Akpan, were graduates of Mass Communication from Akwa Ibom State Polytechnic.

The other three, Miracle Asuquo, graduate of Psychology; Stella Ekikoh, graduate of Sociology and Anthropology; and Ezuruike Coleman, a graduate of History and International Studies, were graduates of the University of Uyo, Akwa Ibom State.

They were buried on the 4th of Aug.