Falana Says FG Should Have Sued Twitter, Not Place A Ban 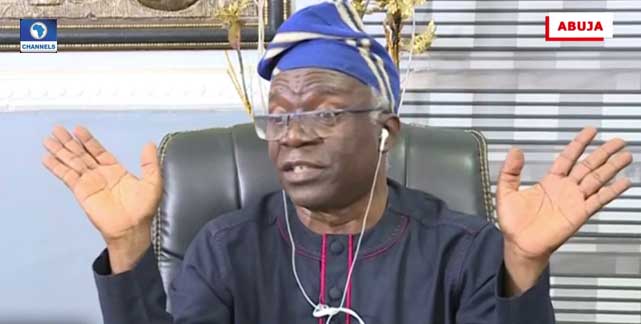 Human Rights lawyer and a Senior Advocate of Nigeria, Femi Falana, says the Federal Government erred in suspending Twitter operations in the country.

According to the senior lawyer who was a guest on the Wednesday edition of Channels Television’s Sunrise Daily, the Federal Government should either have sued Twitter in the United States of America or in Ghana where the microblogging service provider has its African headquarters.

The government had said that there has been a litany of problems with Twitter in Nigeria, labeling the platform as a place where misinformation and fake news spread, however, the ban on Twitter was only placed after President Buhari’s tweet referencing the civil war was deleted.

In his opinion, Falana said there is no ground on which the action of the government can be justified. The rights activist said 40 million Twitter subscribers in Nigeria cannot be disenfranchised over one person’s ego.

Falana’s statement comes just a day after some lawmakers of the Peoples Democratic Party (PDP) staged a walkout during plenary at the House of Representatives.

The lawmakers staged the walkout after its caucus leader Kingsley Chinda was ruled out of order by Speaker of the House, Femi Gbajabiamila, for asking the Federal Government to shelve the Twitter ban while the House conducts its investigation into the legality of the indefinite suspension.

Gbajabiamila’s decision did not go down well with some members of the opposition who in turn resorted to walking out of the plenary.

The PDP lawmakers also insisted that they would continue with their threat to go to court over the matter. They maintained their stand that the action of the government lowers the country’s image in the eyes of other democratic nations.