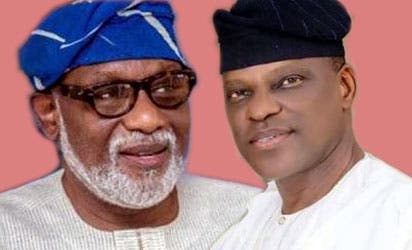 Ondo State governor, Rotimi Akeredolu, whose victory in last year governorship election was, on Wednesday, upheld by the Court of Appeals sitting in Akure, the state capital has called on the Peoples Democratic Party candidate, Eyitayo Jegede (SAN) to do away with endless litigations and join him in building the Sunshine State.

Akeredolu made the appeal in Abuja while speaking with newsmen at the Ondo State Governor’s Lodge, Asokoro, shortly after the judgement.

Governor Akeredolu told newsmen that he never expressed any doubt that his mandate would be upheld, as he noted that the petition of the PDP candidate was premised on flimsy grounds.

He said: “I have said this over and over, this case itself is so flimsy for me as a person. And it is clear because where you believe that you can go through the back door and upturn the will of the people, it is not going to work.

“And it is so clear, we had an election in which the party won 15 out of the local governments, you won three. You are not contesting the result of the election, but you are hinging your petition on the Chairman of the party who signed the nomination that was forwarded to INEC. I don’t see any court that will allow that.

“For me, it is clear, with God on our side, no matter where they went about this case, it will be the same result.

“It is just like when Yoruba say that if you throw the cutlass up 50 times by the time it is landing, it will land on its side.”

The Ondo State governor restated his admonition to Chief Jegede to foreclose further action on the petition and join him in developing the state.

“This will be our second election, Jegede and I are colleagues, as you know, we are both lawyers. The first election, himself, Sola Oke and I contested, the two of them behaved like gentlemen and I commended him for that.

“But this particular one, Tayo for one reason or the other, I said to him, we don’t need to pursue this case. I had called him once or twice. I don’t see why we are going about this action, in that both of us can come together to work for the benefit of the state. That is my own belief, I respect him but he must have a reason behind him pursuing this case the way he’s pursuing it. It is either the party is the one pushing him, or he’s the one pushing himself. Whichever one it is, but I know there must be something behind what he’s doing.

“Importantly, he is one person that I have a lot of respect for, he has respect for me, I see him as a brother. But in election matters, you cannot avoid this kind of contestation.”