Again, US Supreme Court Judge, Ginsburg, Being Treated For Cancer 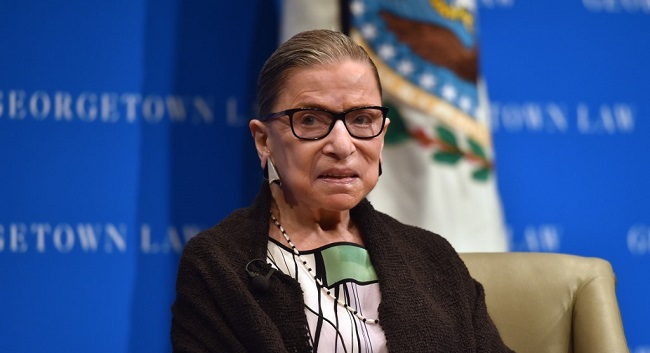 US Supreme Court Justice Ruth Bader Ginsburg, the 87-year-old anchor of its liberal wing, said Friday that she is undergoing chemotherapy for a recurrence of cancer but will remain on the bench.

Ginsburg, one of the four progressive justices on the nine-member court, said a biopsy in February had revealed lesions on her liver.

Ginsburg, the oldest member of the court, said a course of immunotherapy had proved unsuccessful but chemotherapy was “yielding positive results.”

“I have often said I would remain a member of the Court as long as I can do the job full steam,” she said in a statement. “I remain fully able to do that.”

Supreme Court justices serve until they die or voluntarily retire, and Ginsburg has clung to her position despite her age and health struggles, aware that if she leaves it could change the US judicial landscape.

President Donald Trump’s administration would relish an opportunity to appoint a new justice who would tilt the court in a more solidly conservative direction, potentially shifting US law and social policy for decades.

The four liberals — with moderate conservative Chief Justice John Roberts often acting as a swing vote — have prevented a reversal of long-standing abortion rights, rebuked stronger executive powers for the president and staved off greater involvement of religion in public life.

Ginsburg, who was appointed to the court by president Bill Clinton in 1993, has suffered at least three previous bouts with cancer over the past two decades, including colon cancer and lung cancer.

She said she began immunotherapy in May after the biopsy in February revealed the lesions on her liver. When that proved unsuccessful, she began chemotherapy.

‘I wish her the best’

“My most recent scan on July 7 indicated significant reduction of the liver lesions and no new disease,” Ginsburg said.

“I am tolerating chemotherapy well and am encouraged by the success of my current treatment,” she said. “I will continue bi-weekly chemotherapy to keep my cancer at bay, and am able to maintain an active daily routine.

“Throughout, I have kept up with opinion writing and all other Court work.”

Ginsburg said that her brief hospitalization this week for an infection was unrelated to her cancer diagnosis and treatment.

Asked Tuesday at a White House press conference about Ginsburg’s health, Trump said: “I wish her the best… She’s actually given me some good rulings.”

Trump has welcomed some of the Supreme Court’s rulings, but more often over the past three years it has dealt his administration setbacks — on his immigration policies and, more recently, his bid to prevent his finances from being made public.

Both Trump’s Republicans as well as Democrats have made the balance of the court a campaign issue for November’s presidential election.

Trump, who has already appointed two justices to the court, said in June he was planning to release a list of potential candidates for the next vacant seat if he is reelected.

“If given the opportunity, I will only choose from this list, as in the past, a Conservative Supreme Court Justice,” he tweeted.

Democrats for their part have sought to mobilize voters, warning that Trump should not be allowed to name another justice.

Hugely popular with Democrats, Ginsburg has become a feminist hero and an unintentional social media icon fondly known as “The Notorious RBG,” a riff on slain rapper The Notorious B.I.G..

“She’s got this,” said Representative Joyce Beatty, one of several Democratic members of Congress who wished her a speedy recovery. “There’s a reason she’s #NotoriousRBG.”

Ginsburg has been hospitalized several times in recent years, including for two days in May to remove gall stones.

But her hospital stays have always seen her actively participating in court activities by teleconference.