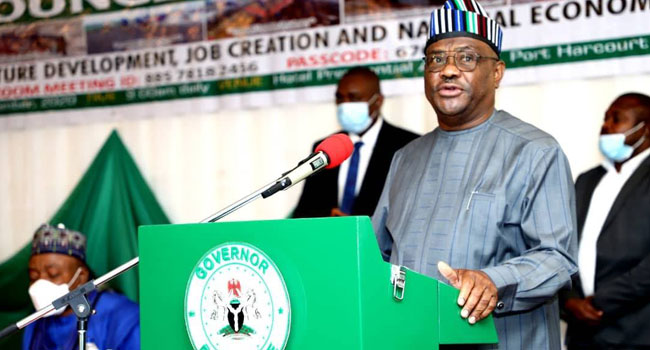 Rivers State Governor, Nyesom Ezenwo Wike, has advised the Federal Government to include the East-West road among the critical infrastructural projects being funded from the coffers of the nation’s Sovereign Wealth Fund.

The governor has also noted that the Federal Government’s directive stopping State governments from funding the construction or rehabilitation of failed federal roads is inimical to the effective development, management and maintenance of road infrastructure across the country.

He made this assertion in his opening address at the 26th meeting of the National Council on Works in Port Harcourt on Thursday.

Governor Wike pointed out that the East-West road which is too important to the economic prosperity of the South-South region and the nation has been under construction for over 15 years, yet a completion date is still not in sight.

He urged Federal Government to urgently consider funding the East-West Road from the Sovereign Wealth Fund to guarantee its completion by 2022 as being taunted by the Minister of the Niger Delta.

Governor Wike advised the Federal Government to reconsider its directive stopping State Governments from funding the construction or rehabilitation of failed federal roads which if not promptly fixed will upset economic growth in the affected States and challenge the wellbeing of citizens.

“It makes progressive sense as a development strategy therefore for State Governments to reconstruct such federal roads with reputable contractors on behalf of the Federal Government and get refunded after due verification of the price and quality of work done.

“The Federal and State Governments need to consult and collaborate regularly to accelerate the delivery of road infrastructure to advance and realize the hopes and aspirations of our people for development and decent living.”

Governor Wike explained that the State government is presently constructing six flyovers a federal government road to ease the perennial traffic congestions on the problematic intersections of the Port Harcourt – Aba expressway.

“Let me, therefore, appeal to the Federal Government to continue to collaborate with the State Governments on road development by allowing States to fix federal roads with the assurance of a refund.”

The governor stated that his administration has consistently dedicated over 65% of the State budget annually for the construction of new roads or the reconstruction and or maintenance and rehabilitation of existing roads across the State, including federal roads.

“The result is the unprecedented delivery of close to 900 kilometres of roads, bridges, and flyovers spread across the length and breadth of the State, including some of the far-flung communities that have now been linked by roads for the first time.”

Minister of Work and Housing, Babatunde Fashola said the covid-19 pandemic brought to the fore the importance of human mobility to the health of any economy with the urban poor appearing to be the worse hit as a result of the lockdown.

According to him, part of measures adopted by the Federal Government to kick-start economic recovery processes was to focus on agriculture including the resumption of construction work in 26 states with its attendant multiple effects on the local economy.

Mr. Fashola explained that against the former practice of flexible pavement connection module that was cost-intensive, but his ministry is ready to unveil the rigid design manual which is cost-effective and will guide construction activities in the country.

Chairman of Senate committee of works, Senator Adamu Aliero who advocated the setting up of an infrastructural bank as an alternative source of funding of federal road projects said it has become practically difficult for the Federal Government to fund the 711 roads captured in the federal budget.

Rivers State Commissioner for Works, Elloka Tasie-Amadi said it has become more imperative for the present generation to plan for the future and end the perennial road infrastructural deficit expletives today.