Church of Satan International in the United States has reacted to the demolition of the Assemblies of Light Bearer Greater Church of Lucifer, popularly known as Church of Satan, Ohafia in Abia State.

DAILY POST had reported that the church was destroyed by youths in the area and the founder, arrested.

Ohafia Area Council Chairman, Fred Idika who confirmed the arrest of the founder said the church was a bad influence to the community.

The founder identified as Udo, aka, Lucifer also runs a brothel in the area and was also accused of terrorizing the community.

Reacting on its official Twitter page, Church of Satan distanced itself from the church in Ohafia.

NEWS:  COVID-19 has killed more people in Africa than Ebola – WHO

According to it, the church has nothing to do with Satanism.

“This has nothing to do with us or Satanism. As we’ve repeatedly warned people, avoid scammers like this and get accurate information directly from our website.” 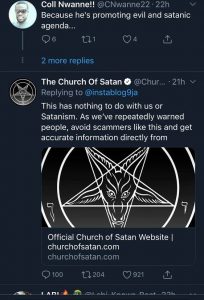