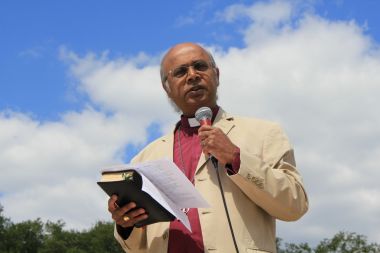 ‘The Church I so loved has lost its way. I simply HAD to leave’: In his own words, former Bishop of Rochester Dr Michael Nazir-Ali explains his dramatic defection from CofE to the Roman Catholic church.

Dr Michael Nazir-Ali today defends his decision to join the Ordinariate in the Catholic Church and describes his disappointment with the Church of England for failing to support ‘core values’.

The former Bishop of Rochester, 72, who revealed the move last Friday, said the Anglican Church had become permeated by activists who pursue ‘a single-issue, often faddish agenda’.

Writing exclusively in the Daily Mail, the married father-of-two said divisions in the Church of England had left him feeling he was ‘at odds with the Church as an institution’. Dr Nazir-Ali, who will be ordained as a Catholic priest this month, is the third English bishop to make the move this year.

When I was ordained an Anglican priest back in 1976, it was a moment of joy, and hope: I looked forward to a lifetime in the service of God in the Anglican Church which had Christ and the Bible at its centre.

The Church’s values were everything I believed in: helping others to come to faith and be formed by it, tolerance and freedom, the sanctity of the person, of marriage and the importance of the family.

Back then the Church celebrated and defended those values. It wasn’t reticent, apologetic or ashamed of them.

I could never have imagined that 45 years later I would feel compelled to leave the Anglican Church I have loved, or that I would be received, as I was a fortnight ago, into the Ordinariate – provided for Anglicans who wish to be part of the Catholic Church while keeping their Anglican inheritance.

It was a bittersweet moment. 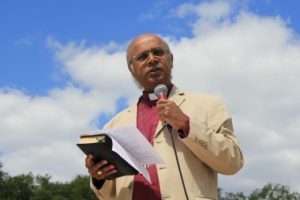 Bitter, because I am deeply saddened that the Church of England is not the church I joined. There are many individual parishes, priests and believers who remain committed to biblical faith and values. But as an institution it seems to be losing its way.

Sweet, because I am excited about the opportunities that joining the Ordinariate will bring: to uphold human rights and help millions of suffering Christians and others round the world. The Catholic Church is a truly united global organisation, which gives it strength.

The Anglican Church has become splintered, a loose collection of churches, many of whom have conflicting interpretations of Christianity. Even when the Church manages to agree on things, these decisions don’t seem to carry much weight – people go off and do it their own way.

I have wrestled with this for several years, but reluctantly realised that I have no choice.

Too often I have felt alone, at odds with the Church. Sometimes it is better to have the wind at your back rather than constantly battle against it.

It is a deeply personal decision. I am moving from one Church to another, in a fulfilment of my spiritual needs. It is not a ‘conversion’ from one religion to another.

The married father-of-two revealed The Archbishop of Canterbury, Justin Welby, did not try to convince him to stay. He added: ‘I think he respected the decision that I had made and I was grateful for that.

Now, as a member of the Ordinariate, I have entered into full communion with the Catholic Church while retaining what I love about Anglicanism: the beauty of worship, love of the Bible and a pastoral commitment to the wider community. And the Ordinariate accepts married clergy – I’ve been happily married to Valerie for nearly 50 years.

The Catholic Church has had its share of problems, but the faith and values are those that I also hold and which I feel are being eroded in the Church of England. It might have been easier at the age of 72 to have remained where I was: to work from the inside to change the things that I feel so strongly about.

Believe me, I have tried – but failed. The Church councils and synods are permeated by activists who each have a single-issue, often faddish agenda, whether it is about cultural correctness, ‘climate change’, identity politics, multi-culturalism (which actually encourages communities to live separately) or critical theory on race, religion and gender – a neo-Marxist theory developed to create conflict by dividing people into victims and villains.

Emphasising people’s differences, rather than what unites them, isolates and separates people and causes the kind of distrust and ‘ghettoisation’ that I believe led, in part, to my friend Sir David Amess MP losing his life.

And then there is the endless self-lacerating about Britain’s imperial past. The latest demand, that churches review their monuments for links to slavery and colonialism, is typical of this obsession. I’m no defender of the British Empire. There was much that was terrible about it: men who enriched themselves at the expense of India and what is now Pakistan, my birthplace. But it also helped people, by improving cities, introducing irrigation systems, modern education and the institutions of democracy.

This apparent terror of getting on the wrong side of the prevailing liberal orthodoxy weakens the Church. People no longer know what it stands for when it seems to be straining to be all things to all people.

People want a sense of the presence of God and the teaching of Christ when they go to church, especially those who don’t go often. They don’t want a happy-clappy chat show or a glorified yoga centre, where the Bible, prayer and true worship are sidelined.

Why has the Church become so reticent about celebrating Christian values? It is clear from history that Christian-based societies are freer societies, in contrast to those founded on secular ideology, such as China and the USSR.

Christian values underpin the freedoms we enjoy in this country. So we should welcome people here on the basis that they respect those values while being free to hold their own beliefs and contribute to wider society.

The Church should also publicly support marriage as a permanent institution, to which a man and a woman commit themselves for life. This is not simply about Christian belief. All the research shows children do better when living with married parents.

Sometimes divorce is unavoidable, and no one denies that single parents do a heroic job, but this doesn’t mean having a married father and mother cannot be held up as the ideal.

Too often the Church appears apologetic about traditional marriage, for fear of offending those who aren’t married. We should not be judgmental, but we should speak the truth as we see it.

Lately, the Church has become swamped by bureaucrats: assistant deans, lawyers, civil servants, race relations and climate change officers, while the numbers of parish clergy keep on being cut.

The Church must support the ‘vicar on the beat’ – who must be visible – in church, in hospitals, schools, supermarkets, listening, caring and leading in putting Christian faith and values into action.

Finally, the Church needs to do more to defend Christians around the world. I have worked with persecuted Christians in countries including Iraq, Iran, Pakistan and Syria and was closely involved in the case of Asia Bibi, the Christian woman accused of blasphemy and sentenced to death in Pakistan.

Dr Nazir-Ali’s conversion to Catholicism is seen as the most significant since Graham Leonard, the former Bishop of London, who was received into the Church in 1994 after rejecting the ordination of women priests.

The Catholic Church played a major role in securing her release, as did the wider Christian community. Fifty-five MPs signed a letter to the prime ministers of Britain and Pakistan. But the Church of England wasn’t very vocal in its support. Why did it not show more leadership?

Hopefully, becoming an Ordinariate Catholic will enable me to support Christians closer to home who are marginalised and hounded by a liberal totalitarianism that demands total consensus.

I am constantly becoming involved in situations where people have lost their jobs because of their Christian beliefs – registrars who don’t want to register marriages contrary to their conscience, midwives who don’t want to take part in abortions or nurses sacked for wearing a crucifix.

The Church of England – and other churches – should be fighting on behalf of all believers of all faiths who have problems of conscience. Too often it doesn’t seem to want to get involved.

Centuries ago, Church leaders were willing to die for their beliefs, and around the world, Christians still do. By failing to stand up for them, and for core Christian values, we are betraying them.

I sincerely hope the Church can find its way back and to rediscover the courage to stand up for what matters. I pray it will once again become the Church that St Augustine brought here a millennium and a half ago, a beacon of hope, beaming its faith and values around the world, not a flame that flickers in the wind.