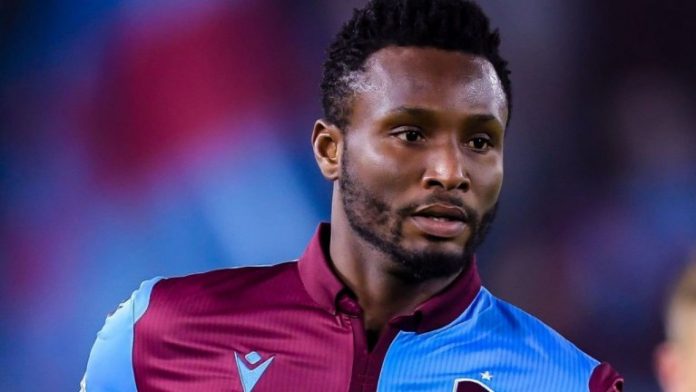 Since leaving Turkish Super Lig club Trabzonspor by mutual consent in March, former Super Eagles Captain, Mikel Obi had been linked with several clubs from Europe to South America and even Africa. The latest of them being newly promoted Serie A club Benevento. The former Chelsea midfielder has however not given an inkling to his next move, but said he was open to the right opportunity

Newly promoted Serie A club Benevento is the latest club side to have been linked with a move for former Super Eagles captain, John Mikel Obi in an effort to gain stability in the midfield having won the 2019/20 Serie B.

The Wizards are hoping to add Mikel who is a free agent after leaving Turkish Super Lig club Trabzonspor in March to bolster their squad for the 2020/21 campaign.

Gianlucadimarzio.com reported that the club was showing no sign of slowing down in the transfer market this summer in its on-going effort to beef up the squad with tested and quality players.
Towards this end, the club has also made an inquiry for Juan Iturbe, currently a free agent after his latest stint at Pachuca to bond with Mikel.

Brazilian Serie A side, Botafogo, had led the race to clinch the signing of former Nigerian captain back in April this year.

Globo Esporte says the Rio de Janeiro club turned their attention to Mikel after failing to agree on a deal with Manchester City legend, Yaya Toure.

The Chelsea icon was pleased with the approach from Botafogo but talks broke down because of the Coronavirus pandemic. Mexican clubs C.F. Monterrey and Tigres UANL also entered the race to sign him too.

Former Chelsea midfielder has said he intends to continue playing football and is open to any offers following his departure from Turkish side Trabzonspor.

The 33-year-old is not ready to hang up his boots yet and in an interview with Egyptian media outlet OnTime Sports, he said he was willing to consider any offer to continue his career.

“Playing in the Egyptian Premier League? Why not?” said Mikel in response to a query about playing in Egypt.

“I am a professional footballer and everything is possible. I never ruled anything out.

“My goal is to continue playing football, and I hope I will have the opportunity, I do not reject any offers made to me, but rather study them well until I make the right decision.”

Following his departure from Stamford Bridge in January 2017, Mikel spent two seasons at Chinese side Tianjin Teda and half a season at Middlesbrough before he joined Trabzonspor last year.

In March, the former Nigeria national team captain refused to play for his Turkish club, arguing that league should have been postponed like its European counterparts as a safety measure against the deadly Coronavirus.

Mikel parted ways by mutual consent with Trabzonspor in March after expressing his concerns about the Turkish Super Lig continuing amid the global Coronavirus pandemic.

The 33-year-old played a crucial role in helping Trabzonspor soar to the summit of the Super Lig after joining Black Sea Storm as a free agent on a two-year deal last summer, at the end of his brief stint in the Championship with Middlesbrough.

Obi’s refusal to play in the top of the table clash between Trabzonspor and Istanbul Basaksehir was said to be the reason for the mutual termination of his contract and the Nigerian midfielder gave up his remaining wages.

The former Super Eagles captain had criticised Turkish football authorities for not suspending the Super Lig season despite the spread of the Coronavirus across Europe, stating he did not feel comfortable during the COVID-19 outbreak and called for the season to be cancelled.

He has been a free agent after his contract ended with Chinese side, Tianjin TEDA.

Trabzonspor was Mikel’s sixth club in his professional career which started at Nigerian side Plateau United, but it was At Chelsea that the midfielder enjoyed huge success winning two Premier League titles, three FA Cup trophies, a Football League title, the Champions League and Europa League.