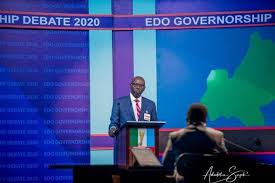 Governor Godwin Obaseki of Edo State and his major challenger for the seat, Osagie Ize-Iyamu have concurred that there is a need for community policing.

Obaseki and Ize-Iyamu spoke on Sunday during the Edo Governorship debate organized by Channels Television.

“I think it is something that we must do but in collaboration with the federal government; we would consult with them, we would seek their approval,” Ize-Iyamu said when asked his stance on community policing.

While admitting that the Nigeria Police Force do not have enough personnel to secure the country, the candidate of the All Progressives Congress (APC) in the Edo Governorship election, stressed that “we must compliment them by community policing.”

“I believe that the state police concept is not bad but there are grey areas that we must tackle with the Federal Government and by the time that one is done and approval is given, Edo State will do it. But for the time being, we are going to invest in community policing,” the APC candidate added.

While agreeing with Ize-Iyamu on the need for state policing, Obaseki said such development could be seen in other countries who have a presidential system of government.

“State police is required and that the logic of our federation, the logic of our presidential system means that policing or security, just like most other services, cannot be exclusive to the centre alone,” the Peoples Democratic Party (PDP) candidate explained.

“You have to have policing at every tier of government – Federal, state and local  –  that is what happens in most Federations.

“What we need to do is to address the fears and concerns of misuse by the various fears; it is no longer an issue for debate.”

Explaining that his government have made some moves, the Edo Governor stressed that community policing exists in diverse forms in the State.

“I’m glad that we have been able to submit a list for community policing to the police authorities,” Obaseki added.

“We are reviewing that list; it is just the first phase because you cannot police every part of this country centrally.

“What we need to do is formalise them, streamline them and then make sure that areas of conflicts are reduced. As a state, we are currently doing that.”

Community policing which has come to the front burner in the country was one of the few instances where the duo agreed on during the heated debate.

The candidates of the two major parties in the governorship poll equally concurred on the modular refinery project with Ize-Iyamu, commending Obaseki for admitting that the project is a brainchild of the APC government.

Both candidates, widely believed to be leading candidates for the September 19 election, equally disagreed on – job creation, debt profile, governance, and qualification, and the facts that they built their plans on.