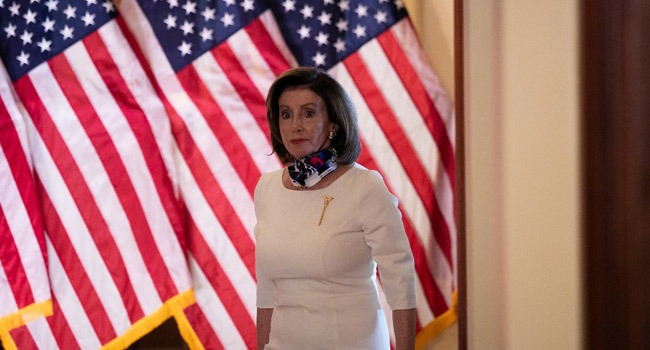 US Democrats on Tuesday unveiled a $3 trillion coronavirus response package, the largest yet, to fund efforts to fight the pandemic and provide emergency payments to millions of American households.

The Heroes Act was introduced in the House of Representatives and could be voted on in the Democratic-led chamber as early as this week.

But the 1,815-page measure faced immediate opposition in the Republican-controlled Senate, where leaders have said a new round of emergency funding is not yet needed.

President Donald Trump has also said recently that he is against rushing through new coronavirus legislation.

They including a massive, $2.2 trillion rescue package in March known as the Cares Act, and a $483 billion measure to pump funds into a popular loan program for small businesses devastated by lockdowns.

The new bill, which House Speaker Nancy Pelosi dubs Cares 2, includes a second round of payments of up to $6,000 per household, in an effort to ease the burden for tens of millions of Americans who have lost jobs in the pandemic.

“We face the biggest catastrophe in our nation’s history,” Pelosi, Washington’s top Democrat, said in introducing the bill.

Congress “must act boldly,” she added.

“If we don’t, it will cost more in lives and livelihoods later. Not acting is the most expensive course.”

Senate and House Republicans swiftly opposed what they described as a bloated liberal wish list.

The measure includes funding for US elections including measures to expand early voting and voting by mail, moves that some Republicans oppose.

It also directs nearly $1 trillion to state, local and tribal governments whose revenues have been depleted by battling coronavirus, and reserves $200 billion for a “Heroes fund” that provides hazard pay for essential workers.

Pelosi spoke to the unprecedented nature of the pandemic and its effects on the US economy and society at large, and took issue with Republicans who have urged a “pause” on new emergency measures.

“We all know that we must put more money in the pockets of the American people. This is not just necessary for their survival, but it is also a stimulus to the economy.”

The United States, the world’s hardest-hit nation, has recorded more than 1.35 million confirmed infections of COVID-19, including 81,800 deaths.