Tighter COVID-19 Rules Kick In For London As Cases Mount 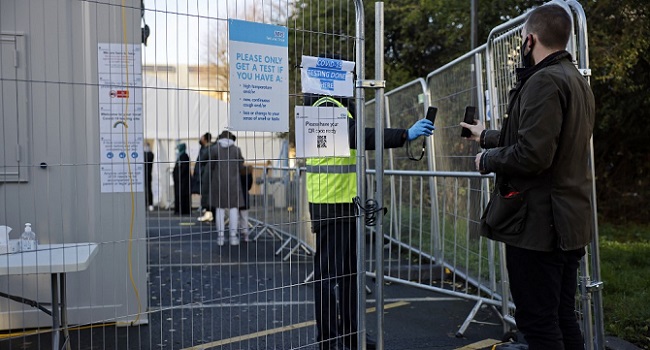 London on Wednesday moved into the highest level of coronavirus restrictions in an effort to control rising infection rates, dealing another blow to hospitality venues before Christmas.

The British capital’s move into “Tier 3” means theatres, pubs, restaurants will have to close, although takeaway food outlets can still operate.

People cannot now socialise with anyone not from their household or support bubble, but can meet in groups of up to six in public places outside.

Health Secretary Matt Hancock warned on Monday that London had seen a “sharp rise” in daily cases and hospital admissions.

“This action is absolutely essential, not just to keep people safe but because we have seen early action can prevent more damage and longer-term problems later,” he told parliament.

Cases were doubling every seven days in some areas, he said, sounding a more downbeat note after hopes of a breakthrough were raised last week with the start of a vaccination programme.

Concerns have also been raised about higher rates of infection among secondary school children aged 11-18, leading to increased testing in the worst-hit areas in and around London.

England only emerged from a four-week lockdown earlier this month, and the government introduced a targeted regional system of tiers to try to cut infection rates.

London had been placed in “Tier 2”, which means non-essential shops and services can open, but it currently has one of the highest infection rates in the country.

Under Tier 3, essential shops and hairdressers can still stay open, as can schools but not indoor entertainment venues.

The government is under pressure to review its Christmas plans, under which there will be a five-day relaxation in the rules to allow free travel and for up to three households to meet.

The British Medical Journal (BMJ) and the Health Service Journal (HSJ) on Tuesday warned the plan could lead to the state-run National Health Service (NHS) being overwhelmed.

“We believe the government is about to blunder into another major error that will cost many lives,” the BMJ and HSJ said in their second joint editorial in a century.

“Rather than lifting restrictions over Christmas as currently planned, the UK should follow the more cautious examples of Germany, Italy and the Netherlands,” they said.

Government minister Steve Barclay said “all things were kept under review” and urged people to “do the minimum” if they visit family over the holidays.

London’s vibrant hospitality sector has been devastated by the virus regulations, and will now feel more pain as it is forced to close in the run-up to Christmas, normally it busiest time.

Britain’s unemployment rate hit its highest level in four years as a result of the pandemic, rising to 4.9 percent in the three months to the end of October, official statistics indicated.

More than a third of the 819,000 job losses since the start of the UK pandemic in March were in the hospitality sector.

Parts of the counties of Essex, Kent and Hertfordshire, which border London, also entered Tier 3 on Wednesday.

A full review of the restrictions for each English region will take place later on Wednesday.

Britain has been one of the worst affected countries in the pandemic, registering nearly 65,000 deaths from just under 1.9 million positive cases, according to government figures.