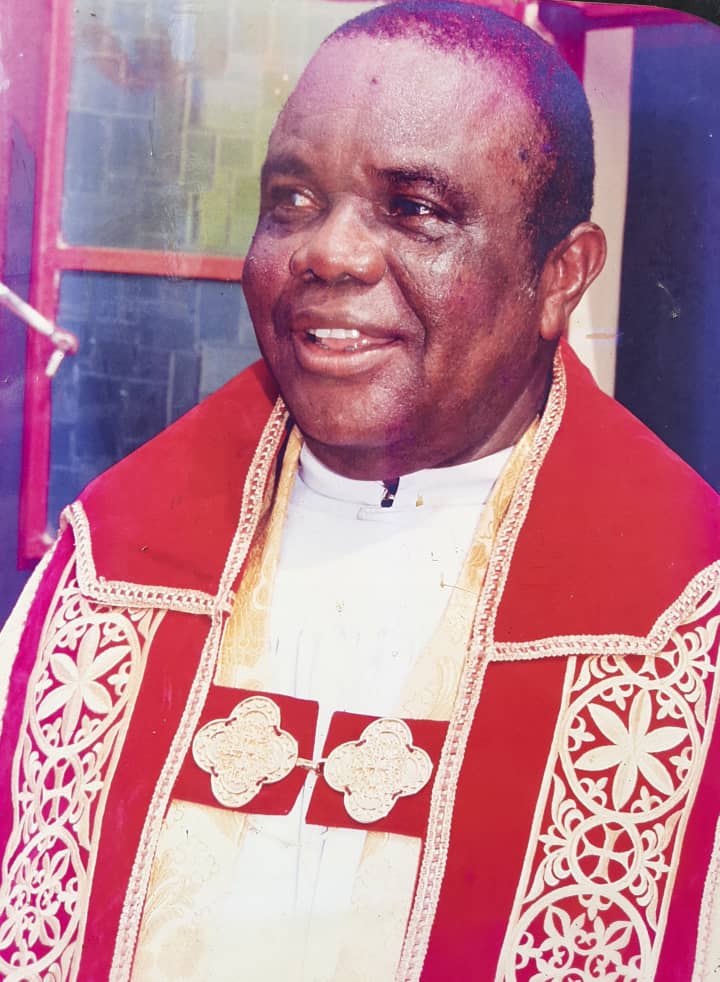 The Holy Bible says that there’s time for everything, a time to be born, a time to die, begone and rest in peace. Therefore both the wretched and the wealthy, the righteous and the wicked, the beautiful and the ugly, the rulers and the ruled die each at the appointed time, respectively. A Scottish Philosopher, Theologian and Church Leader, Thomas Boston wrote, ” Death is an inexorable, irresistible messenger who cannot be diverted from executing its orders, not by the force of the mighty, the bribes of the rich nor the entreaties of the poor.” It’s a predestined end and a gateway to eternity be it in dark Hell or beautiful Heaven for the meek, the gentle and the righteous. No wonder in the Anglican Church we say that in the fullness of life, we are in the midst of death. And death is no respecter of any person. On October 1, 2020, a servant of the Most High God, Venerable Reuben Umeadi C. Obiekwe, joined the Saints Triumphant at the age of 75. He was born on a Christmas Day, December 25, 1945 at Umuezegbe-Umumpama, Aboji Village, Oba, in Idemili South Local Government Area of Anambra State. His journey to becoming a Levite of God started at St. Mark’s Anglican Church, Oba in 1972 (a charity that began at home as the pioneer church Teacher) through St. Simon’s Church, Omor, where he was also the pioneer Church Teacher; St. Mary’s Church, Isekke, Christ Church, Onitsha and to St. Peter’s Church Annex, Aguleri, all as a Church Teacher/Catechist, having been employed and licensed by His Lordship, The Rt Rev L. C. Uzodike. The Ven RUC Obiekwe popularly known as Igwulube, because of his leadership acumen, studied Theology at the Trinity Theological College Umuahia in affiliation with West African Thelogical Institute, between 1982-1984, and was made a Deacon in 1984. One year after his diaconate ordination, he was ordained a Priest. In May 2000, he was preferred a Canon of All Saint’s Cathedral, Onitsha, all by His Grace, The Most Rev Dr Jonathan A. Onyemelukwe. And 8 years going forward, he was collated and installed as a Venerable Archdeacon of Nnobi Archdeaconry at St. Simon’s Church, Nnobi, Diocese on the Niger. The Venerable RUC Obiekwe, traversed the nooks and crannies of Anambra state labouring in the Lord’s Vineyard for 40 good years, evangelising and preaching the gospel of Our Lord Jesus Christ. As an ordained man of God, he worked at St. Thomas’s Church, Otolo-Nnewi, returned on a second missionary journey to St. Simon’s Church Omor and thereafter served at St. Philip’s Church, Umuoji, Holy Trinity Church, Abatete, St. Jude’s Church, Oraifite, St. Mary’s Church, Awka-Etiti, Immanuel Church, Umunnachi, St. Barnabas Church, Ojoto, Immanuel Church, Ideani, and lastly at St. Simon’s Church, Nnobi, covering what has today metamorphosed as Nnobi and Alor Archdeaconries, all in the Diocese on the Niger. He finally retired from the active service in January 2012. The Venerable RUC Obiekwe was married to Ezinne Ifeyinwa Obiekwe in 1973. They were blessed with 6 children one of who is The Venerable Izuchukwu B. C. Obiekwe, a young energetic and industrious son whom he groomed and passed the batton to in the Holy Orders of Anglican Communion, and who rose to attain his father’s feat in the ministry and his life time. Igwulube was a consummate theologian, a caring, compassionate, Christian educator, father and teacher of the Divine Laws and Holy Gospel. As a true Aaronide and counsellor, he was a good listener, friendly, understanding and approachable. He applied the principles of astute administration, excellent pastoral care, dignity and modern marketing in his duties as a Presbyter. Little wonder he nurtured many subordinates in the Church ministry. On Thursday December 17, 2020, he will be buried at his native church, Holy Trinity, Oba. He will be remembered for being a realistic, practical, caring and beloved servant of God and a father, who dignified his vocation and calling, and ran a good race. As in 1Timothy 6:12, he fought a good fight of faith, laid hold on eternal life, to which he was called and have made the good confession in the presence of many witnesses. As a pilgrim, he has only made progress by dropping the flesh which is human to attain a greater joy, an everlasting life and glory which is the crown, the price for the race which is Christ Jesus in Heaven. Servant of the Most High God and great Pastor, Odogwu m, you have returned to Your Redeemer who lives for ever. Igwulube, your wife, Ezinne Ifeyinwa, your children, Izu, Arinze, Chuka, Chinazo, Ngozi and Nonso and other extended family members, colleagues, friends and well wishers are bidding you farewell praying God to grant your gentle soul a heavenly till we meet again. Adieu Igwulube! Adieu The Venerable Archdeacon RUC Obiekwe!!