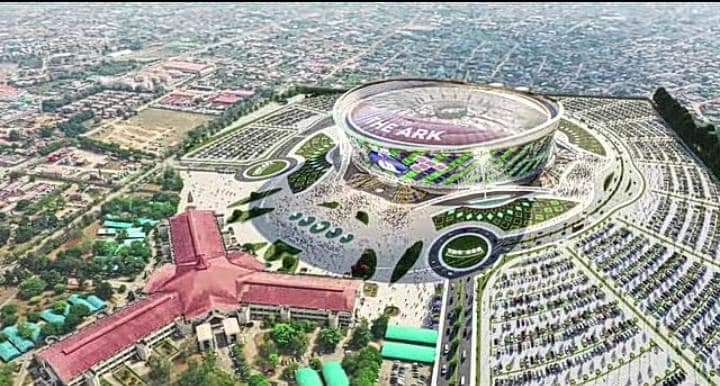 Presiding Bishop of the Living Faith Church Worldwide, Rt Rev Dr David Oyedepo has stated that the ongoing mega church project, the Ark will become the building with the longest span in the world. He also declared that the great marks the Church was making was as a result of unflinching obedience to the dictates of God no matter how inconvenient they might seem.

Announcing this at the second service in Faith Tabernacle, Canaanland, he stated:

“Can I show you something?
The Ark (109,345 seat capacity auditorium) that God is building sir, there is no place on this earth that has that span. They have checked it. The largest span in the world today is 250 or 253 (meters) Now this one is 318.
That is, the engineers around the world are going through strain to have it done. That is beyond what anybody can ask or think. You have stadia like Playboy (Dallas Cowboys) stadium, you have those great stadia in China, there is none that has the span…beyond all you can ask or think. So it becomes a global case study. Amen!

God said this is the place yes sir.
Don’t have no church in town. Yes sir.
I locked the place and put the key in my pocket.
If ye be willing and obedient, you shall eat of the fruit of the land”.

The Ark is a Long-span building as has been stated in a previous article. Long -Span buildings by definition create unobstructed, column-free spaces greater than 30 metres (100 feet) for a variety of functions. These include activities where visibility is important for large audiences (auditoria and covered stadiums), where flexibility is important (exhibition halls and certain types of manufacturing facility), among others.

In the late 20th century, durable upper limits of span have been established for these types:

On the other hand, the largest exhibition hall in the world has a span of 216 metres (710 feet).

In these buildings the structural system needed to achieve these spans is a major concern.

It was also gathered that the Ark has a depth which is just about half of the depth of Burj Khalifa. Burj Khalifa is presently the tallest building in the world.

The Church is expanding the architectural acumen of Nigeria and giving opportunity for Nigerian indigenes to expand frontiers in this field given that the government with the myriad of problems she is battling might not always be privileged to handle these giant strides that exhibit the skill and brilliance of indigenes.

The Ark which will become the new headquarters of the Living Faith Church Worldwide is reported to have a time line of 3 years from foundation laying to completion.