Sermon Delivered at the Funeral of Desmond Tutu 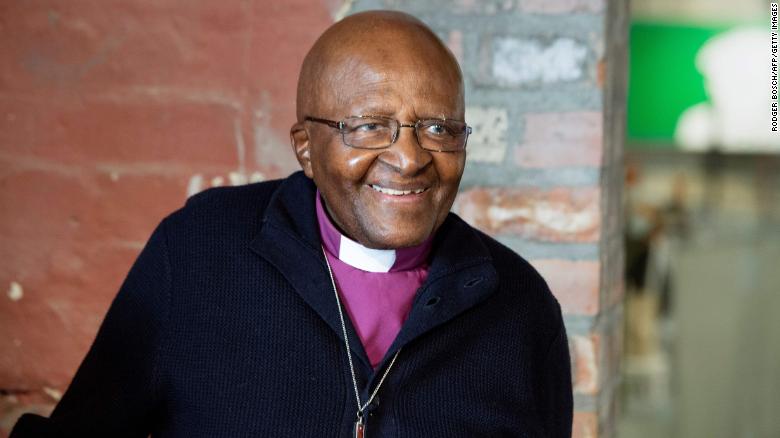 “What does the Lord require of you but to pursue justice, to love kindness and to walk humbly with your God?” (Micah 6:8)

In Desmond Mpilo Tutu this threefold cord was interwoven in a long, lived authenticity. That is why we loved him and respected him and valued him so deeply. Small in physical stature, he was a giant among us morally and spiritually. His faith was authentic, not counterfeit or half-hearted. He lived it, even at great cost to himself, with an inclusive, all-embracing love. His friend, Nelson Mandela, put it perfectly when he said: “Sometimes strident, often tender, never afraid and seldom without humour, Desmond Tutu’s voice will always be the voice of the voiceless.”

I come here today, in my octogenarian years, sensitive to the awesomeness of the occasion, which is likely to catch the tearful and thankful mood of this our nation and of the entire world. I come in response to the expressed wish of my archbishop and friend, for it was he who asked me, some years ago, to do this at his funeral. How could I refuse such a request, such an honour?

First, let me say a few words to the chief mourner among us. My dear Leah, Gogo Emeritus of our church, distinguished member of its Order of Simon of Cyrene, you and I are in a close solidarity in the loss of a much-loved spouse. I therefore know something of what you must now be going through, though each person should be free to grieve in whatever way is most appropriate for them. Many times you wiped away the tears of your husband for, as we all know, he cried very easily and, in the life of our country, both past and present, he had much to cry about, not to mention the wider world which seems in many ways to be tearing itself apart. Today we are here to try, in a small way, to wipe away your tears, though tears are, of course, a very necessary part of our grieving. Allow me to give you, and your family, a comment which was sent to me for my comfort and which I found helpful within the strange twists and turns of my grieving:
“Grief is not a disorder, a disease or a sign of weakness. It is an emotional, physical and spiritual necessity, the price you pay for love. The only cure for grief is to grieve.” (Earl Grollman)

Desmond and I became close in an unlikely partnership at a truly critical time in the life of our country from 1989 – 1996, he as Archbishop of Cape Town and I as his deputy when, as Bishop of Natal, I was elected by my brother bishops to be also what is called “Dean of the Province”. I was asked during a pastoral visit we made to Jerusalem what this cumbersome ecclesiastical title meant. My answer, on the spur of the moment, was that it meant “number two to Tutu”. The nickname stuck, but more importantly, at a deeper level our partnership struck a chord perhaps in the hearts and minds of many people: a dynamic black leader and his white deputy in the dying years of apartheid; and hey presto, the heavens did not collapse. We were a foretaste, if you like, of what could be in our wayward, divided nation.

“What does the Lord require of you but to pursue justice, to love kindness and to walk humbly with your God?” Allow me briefly to unpack each of these qualities in relation to our esteemed Archbishop.

Desmond was not on some crusade of personal aggrandisement or egotism, though he often and disarmingly admitted that he loved to be loved, and what is wrong with that? Do we not all love to be loved? It is a human craving from the moment we are born. But no: Desmond’s response to grave injustice came from the depths of his being and often in response to what he called ‘the divine nudge’. Listen to what his favourite prophet, Jeremiah, wrote: “There is in my heart, as it were, a burning fire shut up in my bones, and I am weary with holding it in, and I cannot.” (Jeremiah 20:9) That is how Desmond Tutu lived and ministered in a situation of systemic and often brutal injustice in his own beloved country. Nor did the fire in his breast die out in his years of retirement and old age, though he was thrilled with the coming of democracy in 1994. “Watch out, watch out, watch out!” he warned sternly when the new government stalled expediently in giving a visa to his friend and fellow Peace Laureate, the Dalai Lama, at the time of the Arch’s 80th birthday celebration. He was not similarly turned down when he went to Dharamsala in India for the Dalai Lama’s 80th birthday and, together, they produced a remarkable book called “The Book of Joy”, which is a spiritual classic for our time and, indeed, for all time: a book crafted by deep and humorous conversation between a Buddhist and a Christian, and compiled beautifully by Douglas Abrams who is a Jew. There is a profound pursuit of a just order in this fine product, namely a religious just order amidst so much shameful intolerance in today’s world. Those who have ears to hear, let them hear.

This was our ‘Arch’ at his very best. His was not a harsh, ideological quest for justice. Always it was grounded in mercy, in ‘hesed’ (to use the Hebrew word), in an enduring loving-kindness: the gentle touch, the forgiving heart, the warm smile – ah yes, the warm smile. Remember his fine book on the Truth and Reconciliation Commission, that seminal body which he chaired; it was titled “No Future without Forgiveness”. How could someone who had suffered so much hostility and disdain in his own country settle for such a conviction, such magnanimity? It was because all that he stood for and strove for was undergirded by a spirit of mercy towards everyone. Did you ever receive from him a phone call or a gift of flowers, a card, a handwritten letter or an email? When my wife of 57 years died on All Souls Day, 2016 he was on the phone to me, despite great physical frailty, to comfort me and to offer, as he would say, a little prayer from the heart. Desmond was quite at ease praying on the telephone with others. Actually, he prayed anywhere and everywhere, not only in churches and chapels. He so wanted to be at Dorrie’s funeral and was truly pained that ill-health prevented him. The flowers, of course, arrived.

Walk humbly with your God

Here is the mystery of the interior pilgrimage of the soul. There were three Ps about our Archbishop; he was the prophet, the pastor and the pray-er. What many perhaps did not realise was that the prayer undergirded, guided and prompted all the rest. A daily Eucharist was his custom, regardless of the circumstances; I remember having one with him in Frankfurt airport when we waited for a connecting flight. It is utterly appropriate that his funeral service today is immersed in what we call a Requiem Eucharist, and it would be his wish that all of us be free to receive the sacred body and blood of Christ at it. Desmond was not only immersed in the liturgical prayer of the church; he was also up at four in the morning each day to pray – to meditate, to contemplate and to intercede. In his intercessory work, he would engage in what Leah called a Cook’s Tour around the whole world. In his prayer the world was his parish, and surely that was appropriate for a holder of the Nobel Peace Prize.

So I give you, in memory of this holy and very human man, this humane leader, a threefold cord which we too can try to emulate: pursue justice, love kindness, and walk humbly with your God.

I conclude this intertwined sermon and eulogy with the words of a personal Praise Song, looking back on our Arch’s remarkable life and held in awe by his going from us now:

Yo!
Desmond Mpilo Tutu
Born and raised where the gentle Batswana live,
Land of the cameeldoring tree and the wide, wide vlakte;
his mother a domestic worker, his father a teacher;
Polio survivor, T B survivor, visited unforgettably in hospital
by one Trevor Huddleston C R,
Bright child, living in the shadow of the great injustice.

Raised through sickness to a priestly calling,
finding the fire in your breast that prevented silence.
Articulate scholar, prophet, pastor, pray-er,
preacher of passion with arms stretched out,
diminutive person making presidents tremble.
Small person of the past becoming great in the unfolding purposes of God.

Yo!
Mbishobhi,
Learning the art in mountain kingdom, being greeted ‘Khotso, Ntate’,
visiting parishes in Basotho blanket astride a hardy horse.
Learning the harder way in the city of gold,
the bitter irony of red carpets abroad and icy stares back home.
Learning to lean on God and the safety valve of an irrepressible, self-
deprecating humour.

Voice of the muted multitude, son of the dark mysterious land,
Called at the height of crisis to the Cape of Storms to transform it into the Cape of Good Hope;
Mbishobhi Omkhulu!

Take rest at last, lala kahle, our dear friend the Arch.
You have tended the wounds of noble strife, the wounds of Ubuntu;
enter now into the full embrace of the great and generous God you served.