Schools To Reopen As COVID-19 Fears Ease In South Korea 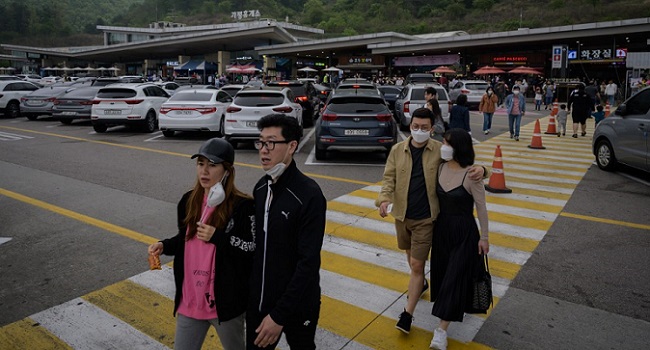 South Korean students will return to school starting next week, officials said Monday, as the country seeks a return to normal life after a significant drop in new coronavirus cases in recent days.

Schools were shut in early March as South Korea endured one of the worst early outbreaks of the disease, and at one point, it was the second-worst hit nation on the planet after mainland China.

But it appears to have brought its outbreak under control thanks to an extensive “trace, test and treat” programme that has drawn widespread praise.

Students have been taking online classes since April, but officials said schools will start reopening gradually from next Wednesday through June 1.

“The reopening of schools does not mean the end of COVID-19,” said education minister Yoo Eun-hae, adding that precautionary measures must be taken to return to the “free and energetic classes” of pre-outbreak times.

Students must keep their masks on except during lunch and keep their distance from each other, Yoo said, adding they will be asked to wipe their desks every day first thing in the morning.

The decision about schools has come ahead of South Korea’s expected loosening of social distancing rules on Wednesday.

Some professional sports, including baseball and soccer, are due to start their new seasons this week after being postponed over virus fears, although the matches will be played behind closed doors.

The reported death toll in the country is around 250 — vastly lower than in Italy, Britain, Spain and France, where at least 24,000 fatalities have been recorded.