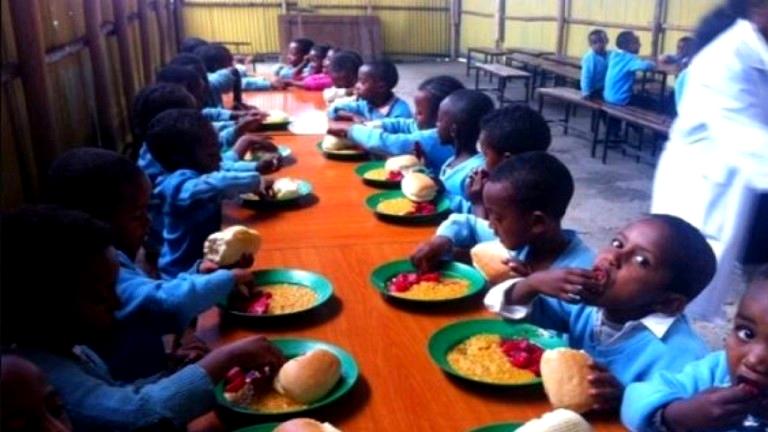 Food vendors engaged by the Federal Ministry of Humanitarian Affairs, Disaster Management and Social Development for home grown feeding programme in Ondo state are on collision course with the state government over funds disbursed to them to cook for pupils in schools.

The vendors alleged that officials of the state government are shortchanging them hence the poor quality and inadequate food provided for the pupils over time.

Speaking with newsmen in Akure on behalf of other vendors, Mrs Ajayi Toba

described as insufficient the money disbursed to them to cook for primary school pupils in the state.

Ajayi noted that the money collected on weekly basis to cook food for the pupils was no longer practicable with the current market reality.

She lamented that they were getting a sum of N12,000 weekly to take care of 70 pupils in the schools.

“The money given to us is not enough compared to the number of students we cook for.

“To be sincere, the government is giving us eggs for the pupils but other expenses are still there.

“Food Ingredients are also not friendly in the market and we have complained but nothing was done. That is why we give the pupils whatever the money giving to us care purchase.

“There is no how we can give fruits to the pupils, how will we do that ? So we have ruled out fruits because there is no money available for that. It is practically impossible.

Findings showed that food items such as vegetables are also no more given to the pupils.

Speaking with vanguard in confidence, an head teacher in one of the schools visited blamed officials of the state government and the food vendors.

He lamented that the food vendors have not been consistent while government officials have also been economical with the truth on funds made available for the program.

According to her “ At times, when we called the cook, she will tell us money is not dropping into her account and when we report to government, they will look the other way. So who is deceiving who?.

“The vendors have not come this term. We have not seen them since we resume this term. Even last term, they didn’t come for about two weeks till we had holidays.”

But in her reaction, the Senior Special Adviser to governor Rotimi Akeredolu on Multilateral and Intergovernmental Relations and Ondo State Focal Person on Nigerian Social Investment Programme, Mrs Bunmi Ademosu dismissed the allegations against government officials shortchanging the food vendors.

Ademosu alleged that the food vendors had over the times inflated the number of pupils they claim to be feeding in many schools hence the need of the ongoing biometrics data capturing.

“There are rules and regulations following school feeding. We don’t pay money from Akure and their money is paid directly into their bank accounts.

“As we speak, the Federal government is going round and doing biometrics, so if some food vendors are claiming that they are taking care of 70 pupils and they get to the schools and do biometrics of just five children, will they now say anything again ?

” Whatever anyone says now,there is no answer I will give because we keep repeating the same thing. But the result of biometrics will be out and everyone will keep quiet over the whole story.

Ademosu said that ” there is a school somewhere in Akure North Local government, when a food vendor came to my office and she was yelling and making noise that she had over one hundred pupils.

She added that “I had to direct two of the officials to visit her school and on getting there, it was discovered that the woman was not even taking care of 30 pupils and had been collecting eggs for over 70 pupils. So they have been giving out wrong information.