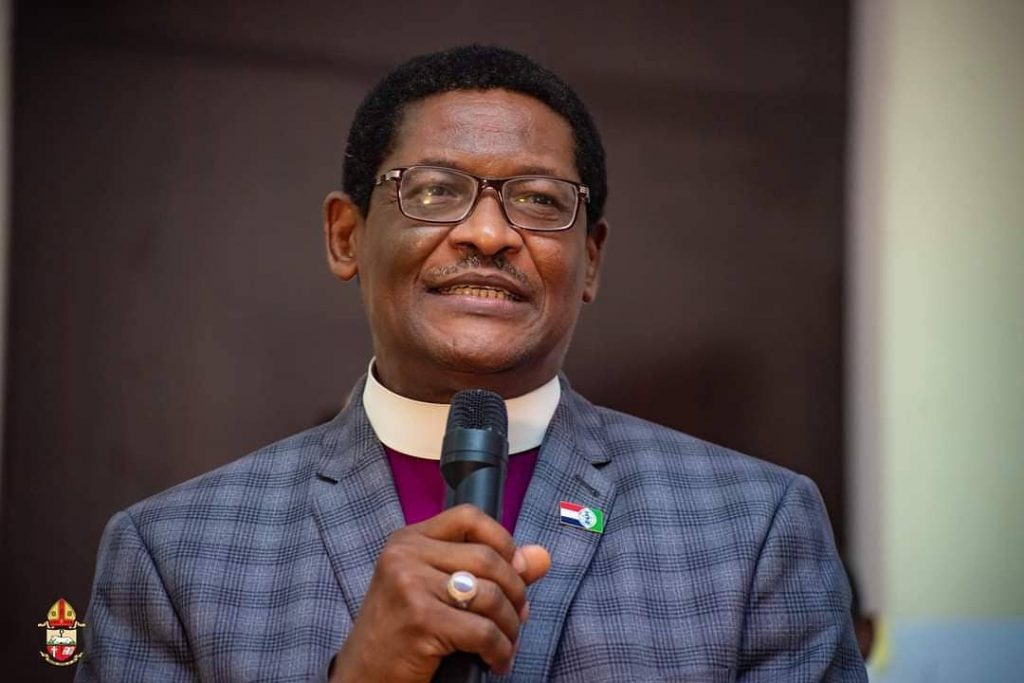 Share
Facebook Twitter LinkedIn Pinterest Email WhatsApp
rchbishop of the Ecclesiastical Province of the Niger Delta, The Most Rev. (Dr.) Blessing Enyindah and his wife, Mrs. Precious Enyindah, last Sunday, held a special thanksgiving service at St. Peter’s Cathedral Isiokpo, Ikwerre Local Council of Rivers State, where the couple gathered friends and relatives to join them in thanking God for Enyindah’s recent elevation as the Archbishop of the Province.
Enyindah, who is the first Anglican Archbishop of Ikwerre extraction to hold such position, also holds such other positions in the Church of Nigeria as Vice Chairman, Anglican Cable Network Nigeria (ACNN), Management Board and Coordinator of the newly constituted Team on Senior Clergy Training. The elated Archbishop sees his elevation as God’s handwork and a call for more challenges.

Pledging to wholly depend on God in his new phase of service, Enyindah said: “I thank God for what He has continued to do in my life. I am very happy the way God is leading and taking us to where He wants to take us and of a truth, on God alone will I depend in serving Him. I will depend on His Grace, His encouragement and His watch over us, as we watch over the people.”

Primate of the Church of Nigeria (Anglican Communion), The Most Rev. Henry Ndukuba, while congratulating the cleric, prayed God to sustain him. He noted that Niger Delta was the testing ground for the CMS three selfs (Self-supporting, Self-governing and Self-propagating) for the indigenous and independent church that would carry the gospel to their people, as men of God in the area laboured assiduously and demonstrated faith in God, for which the church is celebrating God’s faithfulness and leadership.

Acknowledging the impart of the Hoy Spirit and authority in Enyindah’s life and ministry, Ndukuba called on members of Niger Delta to support his ministry, so that he would succeed. He reminded the celebrant that authority is the authority of faith in God, which leads one to service God just as the Son of man came, not to be served, but to serve. He urged him to be a man who leads people with the authority of God, just like Moses who led God’s people with authority.

He said: “The authority you exercise is derived from Him. and any time you deviate from obeying Him or fail to submit to Him, you have lost the authority no matter what men may say of you. And if you will serve in the way of Christ, I want you to know that sacrifice is at the heart of every service.

“Enyindah, you were not brought to this position by any man but God. You should, therefore, serve God with all your heart. He should be glorified in your ministry.”

Ndukuba also enjoined the people to always thank God with grateful heart, no matter what they are passing through because God requires that they be grateful in worshipping Him.

The first two Archbishops of the Niger Delta Province, as presently constituted, The Most Revs Ignatius Kattey and Tunde Adeleye, the Archbishop of Jos, The Most Rev. Marcus Ibrahim, the retired Archbishop of Owerri, The Most Rev. Benneth Okoro and over 25 other Bishops, as well as the Primate’s wife, Mrs. Angela Ndukuba, were present at the service.