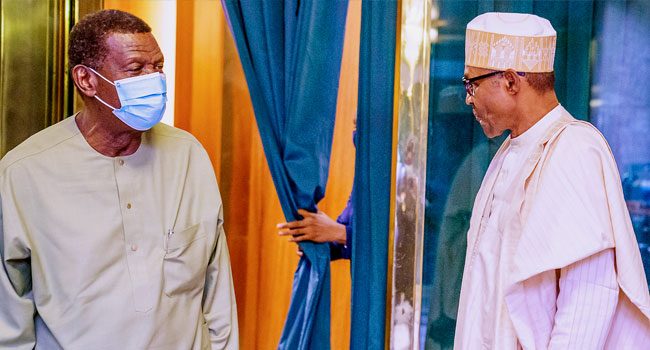 President Muhammadu Buhari on Monday received the General Overseer of the Redeemed Christian Church of God, Pastor Enoch Adeboye at the State House in Abuja.

Vice President Yemi Osinbajo, and the Chief of Staff to the President, Ibrahim Gambari, were also in attendance during the visit.

Details of the meeting are still sketchy at the time of publishing this report.

Pastor Adeboye is the first high-profile clergyman to have visited the Nigerian leader since the COVID-19 pandemic started.

Worried by the security situation in the country, Adeboye had in February led members of his congregation in a prayer walk against insecurity in Nigeria.

The directive to members of the RCCG followed the declaration of a prayer walk by the Christian Association of Nigeria (CAN) to address the spate of killings across the country.

About 25, 000 parishes of the RCCG took part in the prayer walk, according to a statement by the Assistant General Overseer of the church, Funso Odesola.

Adeboye’s visit is coming a few weeks after President Buhari signed the Companies and Allied Matters Act (CAMA) 2020, a development which has sparked debates among religious leaders.

CAN, the umbrella body of Christians had “outrightly” rejected the Act, describing it as “unacceptable, ungodly, reprehensible, and an ill-wind that blows no one any good.  It is a time bomb waiting to explode.”

A statement by CAN said while the body is not against the government’s resolve to fight corruption, “the Church cannot be controlled by the government because of its spiritual responsibilities and obligations.”

While speaking during the recently-concluded conference of the Nigerian Bar Association (NBA), Vice President Osinbajo gave an insight into why CAMA has raised eyebrows among Christians.

“As a general position, I do not think it will be right to say that pastors don’t want to be accountable,” he said.

“I believe that several Christian organizations and pastors are willing to be accountable. The problem that they may have is ensuring that processes are not abused in such a way as to compromise the entire organization.

“And I think that if all that is required is some process of accountability, I think it will be easier for organizations to accept that.”