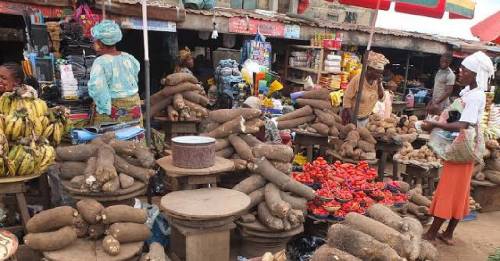 Latest data published by the National Bureau of Statistics (NBS) on Tuesday indicates that the Consumer Price Index (CPI), which measures inflation, increased by 17.93 per cent (year-on-year) in the fifth month of the year 2021.

While this is 0.19 per cent points lower than the 18.12 per cent recorded in April, increases were recorded in all Classification of Individual Consumption by Purpose (COICOP) divisions that yielded the headline index.

On a month-on-month basis, the headline index increased by 1.01 per cent in May, representing higher percentage points of 0.04 than the rate recorded in the previous month (0.97 per cent).

According to the report, the corresponding 12-month year-on-year average percentage change for the urban index is 16.09 per cent in May – higher than the 15.63 per cent reported in April while the corresponding rural inflation rate in May is 14.94 per cent compared to the 14.48 per cent recorded in the previous month.

Food Prices On The Rise

The composite food index, on the other hand, rose by 22.28 per cent in May as against the 22.72 per cent reported in April.

This rise in the food index, the NBS explained, was as a result of increases in prices of bread, cereals, milk, cheese, eggs, fish, soft drinks, coffee, tea and cocoa, fruits, meat, oils and fats, and vegetables.

It disclosed that the food sub-index increased by 1.05 per cent in May from the 0.99 per cent recorded in April, on a month-on-month basis.

The core inflation, also known as ‘all items less farm produce’, which excludes the prices of volatile agricultural produce, stood at 13.15 per cent in May as against the 12.74 per cent recorded in April.

According to the NBS, the highest increases were recorded in prices of pharmaceutical products, garments, shoes and other footwear, hairdressing salons and personal grooming establishments, furniture and furnishing, as well as carpet and other floor coverings.

The average 12-month annual rate of change of the index was 11.50 per cent for the 12-month period ending in May – representing 0.25 per cent points compared with the 11.25 per cent recorded in April.