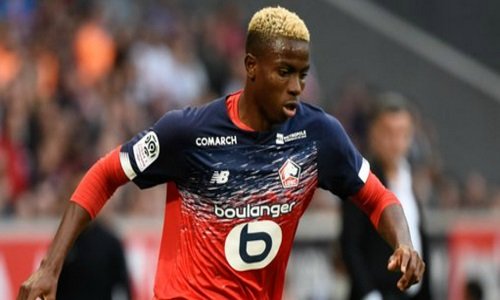 Lille manager Christophe Galtier announced that Arsenal target Victor Osimhen will be leaving the club this summer along with team-mate Gabriel.

Osimhen, 21, has been in stellar form for the Ligue 1, with the forward scoring 13 goals in 25 appearances as Lille finished the 2019/20 season in fourth place.

Lille owner Gerard Lopez revealed at the end of May that ‘multiple offers’ have been made for the Nigerian, but Galtier has confirmed that him and Napoli target Gabriel will be moving on.

The Lille manager said in a press conference: “Regarding Victor and Gabriel, yes, I’ve known for a long time that they’re leaving.

“They’re working hard with us in the meantime. We’re working on the players who are currently here and those likely to replace them. Of course, the club is working to replace him [Osimhen].”

Osimhen’s superb season for Lille has made him one of the most sought-after young attackers in Europe, with clubs in France, Italy and England interested in the 21-year-old.