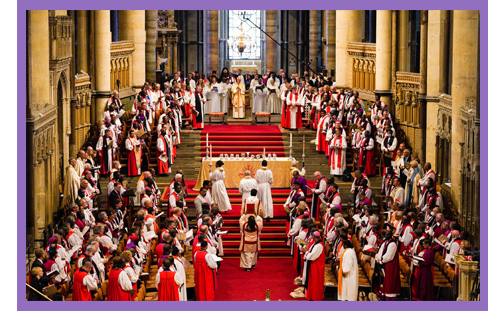 The Bible states in Psalm 11:3 and I quote When the foundations are being destroyed, what can the righteous do”

This is a true reflection of the present apparent crisis within the Anglican community worldwide; the great division that was inspired by the shift in the biblical foundation due to acceptance of secularism and liberalism has become evident not just to the Anglican communion but to the entire world.

The recently concluded Lambeth conference which should have been a gathering in the communion of Anglican church leaders was rather what some experts would call incomplete. This is because of the absence of some of the regular attendees and some who attended but declined to partake in the holy communion due to the current disparity relating to the sexual orientation and practices that have been an issue for some decades now.

The Anglican communion has been in existence for centuries, the foundations of the church from inception have been the bible and the undiluted teachings of the word. These facts have been the pilot upon which the church has been operating. It is a wonder, however, why the belief system has and is still changing in some quarters of the church.

The Lambeth Conference a decennial gathering of the bishops of the Anglican church has been a continuous tradition since 1867. Except for 2018 when the Archbishop of Canterbury His grace Justin Welby canceled it and postponed it to 2020 that further led to the internal division that was to do more harm than good and was further postponed to 2022 due to covid.

In 2008, the fourteenth Lambeth Conference was held and it was in that year that conflicting views over homosexuality pushed the liberals within the ranks of the church and conservatives far apart with a large number boycotting the conference based on the differences, spiritually sound members have decided to part ways, saying they have had enough of this pervasion.

Prior to 2008, in the 1990s the Anglican communion had had its struggles with controversy concerning this issue, this gave rise to the now famous Lambeth resolution 1.10 created in 1998 at the 13th Lambeth conference which rejected homosexual practice as incompatible with scripture. The Lambeth 1.10 however was not legally binding and in my opinion, the liberals/secularists leveraged that. By 2002 the diocese of Westminster and the church of Canada permitted the blessing of same-sex unions.

To worsen the situation in 2003, two openly gay men in England and the United States of America became candidates for bishop, as it stands now since 2004 other Anglican provinces have permitted the ordination of gay clergy and this has made homosexual practices spread like gangrene and very fast too if I might add.

It is these events and many more unmentioned that gave rise to the breakout from Lambeth in 2008 and birthed The Global Anglican Future Conference GAFCON in the same year. GAFCON was established when moral compromise, doctrinal error, and the collapse of biblical witness reached levels that are spiritually detrimental that it was necessary to take a united stand for the truth, and since its creation in 2008, Primates, Archbishops, Bishops, and clergymen from provinces across the globe who do not agree with the decisions of Lambeth have attended this Gafcon instead of the Lambeth conference.

In an interview recently conducted on Advent Cable Network Nigeria ACNNTV, two Nigerian bishops, Rt. Rev Prof. Dapo Asaju Bishop theologian and Bishop of Church of Nigeria, Ilesa diocese and  Rt. Rev Felix Orji, Bishop Anglican diocese of the west and coordinating Bishop of the Church of Nigeria North America mission in Houston Texas (CONAM), reiterated their stand and that of their province about having no intentions to associate with the Lambeth conference. Bishop Asaju in his contribution called on all the liberals to repent, including the Archbishop of Canterbury, His Grace Justin Welby, saying before that happens the church of Nigeria itself dissociates in every way possible from the Lambeth Conference.

Worthy of note is the response of Bishop Orji on the difference in sexual(homosexual) orientation and practice. In his words, he said I am aware of claims in the western world that there are people who are born gay or with a gay gene, we can all agree that we are living in a fallen and decaying world, so this cannot be ruled out.

Truth is ”orientation” is not an excuse and as the body of Christ, we accept that we are born sinners but we have been offered salvation and so whatever impediment we have or proclivity to certain things has been wiped out by the blood of Jesus.

Bishop Asaju in his closing remarks said that repentance and penitence are always available in the case of practice, there is simply no meeting point for the true body of Christ and such beliefs or practices. Let us take it upon ourselves as a duty/call to preach the word and spread the love of Christ to those who are lost and perishing in all kinds of sin so they may be saved, sanctified, and restored.