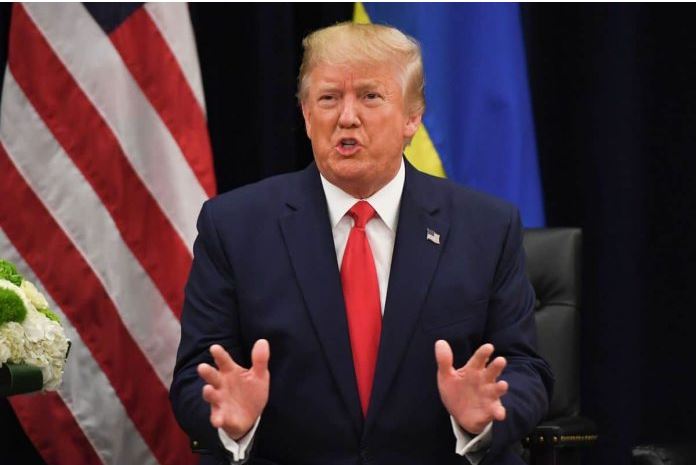 Fellow citizens of the world, the above title is not original to me. It is the headline of a very profound and inspired article written on June 3, 2020, by one of the greatest novelists of the last century, Salman Rushdie, in the Washington Post.
I know many of today’s readers may not know who Salman Rushdie is, so let me a give brief description of this prodigiously gifted writer and how significant he’s been in the past three decades. I first encountered the novels of Salman Rushdie around 1989 as a reporter at the Weekend Concord. Rushdie had just released his controversial book, Satanic Verses, which many Muslims found gravely uncomplimentary and deeply offensive to their religion and faith.

The book was banned by the Islamic faithful leaders. Riots took place all over the world as the heretical book was burnt and shops stocking it were attacked.
On Valentine’s day, 14 February 1989, a death fatwa was proclaimed and issued on Rushdie’s head by the then spiritual leader of Iran, the much revered and feared Ayatollah Sayyid Ruhollah Khomeini. For those who may not know the meaning of fatwa, let me quickly explain. It is a ruling under Islamic Sharia law which leads to a culprit who has committed heresy against Islam or the holy Prophet Muhammad, being declared a persona non grata who deserves to be killed wherever and whenever he is found. This sentence may be enforced by any Muslim faithful and such a Muslim immediately becomes a Martyr. This was certainly dangerous and perilous times for Rushdie. He knew the faith, calibre and fanaticism of those whose faith he had abused and promptly went into hiding under the protection of the British Government. The situation was so charged and inflamed that the British Government and Iran broke off diplomatic relations over the fatwa.

Rushdie himself was not to surface for many years, eventually doing so and appearing, at a U2 music concert in London in August 1993.

Sir Ahmed Salman Rushdie was born in Mumbai, India, on June 19, 1947. By the time his second novel, Midnight’s Children, won the prestigious Booker Prize in 1981, he was already recognised and acknowledged as a distinguished writer. The book was subsequently rated “the best novel of all winners” of the Booker Prize on two occasions, the 25th and the 40th anniversary of the prize. But in September 1988, he bit more than he could chew when he wrote The Satanic Verses.

The book as I have said attracted widespread criticism and protests across Muslim countries and other nations including the UK where Rushdie was then living, when some people realised what they claim to be the irreverent depiction of the holy Prophet Mohammed. He received death threats and ultimately a bounty and the fatwa were placed on his head. Incidentally, ironically, and by a quirk of fate, Ayatollah Khomeini died on 3 June 1989 after having five heart attacks in ten days, barely only four months into the fatwa that he had proclaimed against Salman Rushdie. It is also significant that the Rushdie comment that I am reproducing here was written on the 41st anniversary of Ayatollah Khomeini’s demise.

I first got hold of the highly controversial book in March 1989, through my boss at the Weekend Concord newspaper, Mr Mike Awoyinfa. It was sacrilegious to be seen with the book at the time, although the hullaballoo was not that prevalent or ferocious in Nigeria. We are both greedy about books.

Since the Satanic Verses debacle, I’ve been a keen follower of Rushdie and purchased most of his works. He moved from England to the United States in 2000 and has permanently lived there, acquiring American citizenship about four years ago.
I was excited to stumble on his essay yesterday as I was getting ready to write my weekly column. The article was lucid and logical and I decided to make it available to my African readers for the benefit of the strange acolytes of President Donald Trump in Africa who seemed to have been conned and scammed by the antics of a man who has never hidden his pathological hatred for people of colour. Some of the ugliest descriptions of colour were coined and “patented” by Trump. But for those who think Trump can do no wrong and that he is infallible, the unfortunate and unnecessary wasted blood and life of George Floyd seems to have united the world against the white supremacists of which Trump is the undisputed champion. Let me allow you to read and savour the words of Salman Rushdie…
“In my life, I have seen several dictators rise and fall. Today, I’m remembering those earlier incarnations of this unlovely breed.
In India in 1975, Indira Gandhi, found guilty of electoral malpractice, declared a state of emergency that granted her despotic powers. The “emergency,” as it became known, ended only when she called an election, believing she would win, and was annihilated at the polls. Her arrogance was her downfall. This cautionary tale formed a part of my novel “Midnight’s Children.”

In Pakistan in 1977, Gen. Mohammed Zia ul-Haq staged a coup against Prime Minister Zulfiqar Ali Bhutto and executed him in 1979. This dark story was the inspiration for my novel “Shame.” The circumstances of my life have given me some understanding of the dictatorial cast of mind.

Extreme narcissism, detachment from reality, a fondness for sycophants and a distrust of truth-tellers, an obsession with how one is publicly portrayed, a hatred of journalists and the temperament of an out-of-control bulldozer: These are some of the characteristics.

President Trump is, temperamentally, a tinpot despot of this type. But he finds himself in charge of a country that has historically thought of itself — by no means always correctly — as being on the side of liberty. So far, with the collusion of the Republican Party, he has ruled more or less unchecked. Now an election looms, and he is unpopular, and flails about looking for a winning strategy. And if that means trampling over American freedoms, then so be it.

I have lived in the United States for 20 years and been a citizen for the past four. One of the most important reasons for becoming a citizen was my admiration for the ideas of freedom embodied in the First Amendment to the U.S.

Constitution. Trump, whose regard for the Second Amendment is well known, needs reminding of the First, which, if I may help, states in part that “Congress shall make no law … abridging the freedom of speech, or of the press; or the right of the people peaceably to assemble, and to petition the government for a redress of grievances.”

And yet, the man whose incompetence allowed the pandemic to tighten its deadly grip around our necks, and whose inflammatory language full of racist dog whistles has played a significant role in unleashing white-supremacist bigotry upon us all, stands in the Rose Garden of the White House and announces without an iota of shame that he wants to protect peaceful protesters. At that very time, just down the street, his security forces, some of them on horseback, are attacking a peaceful protest with tear gas and rubber bullets. A moment later, he characterizes the demonstrators as terrorists and characterizes their protests as crimes against God.
He has the pictures to prove it: the fleeing young people, the clouds of tear gas, the line of horses advancing in the name of the Law. If there’s one thing Trump knows, it’s how to construct an image the cameras will like.

This man who, before he got his present job, was almost never seen inside a house of worship, then holds up a Bible outside a church to demonstrate his piety, and if the bishop of the diocese denounces him soon after, accusing him of misusing the church in the service of “a message antithetical to the teachings of Jesus,” what of it? Once again, he has the pictures, and they speak louder.
We are so inured to the behavior of this man, so used to his lies, his inexhaustible self-regard, his stupidity, that maybe we are tempted to think of this as just another day in Trumpistan. But this time, something different is happening. The uprising that began with the killing of George Floyd is not fizzling but growing. The man in the White House is scared, and even, for a time, takes refuge in the basement and turns out the lights. What is such a person to do at such a time?

If he is allowed to use the actions of a tiny minority of criminals and white extremist infiltrators to invalidate the honorable protest of the vast majority against the murder of Floyd, the violence of the police toward the black community and the entrenched power of American racism, he will be on his way to despotism. He has threatened to use the Army against American citizens, a threat one might have expected from a leader of the former Soviet Union, but not of the United States.

In my most recent novel, “Quichotte,” I characterized the present moment as the “Age of Anything-Can-Happen.” Today I say, beware, America. Don’t believe that it can’t happen here.”

Thank you, Sir. Nothing more to add with respect to the reckless and dangerous bully that Trump is. For me, his day or reckoning is imminent, and he will get his comeuppance very soon at the conclusion of the November 3 election in America. Maybe then, the scales will fall from over the eyes of those black people, particularly Christians, who see Trump as some sort of Messiah who has come to provide them salvation from the heathens that other Americans represents to them. On the contrary, for me Trump is the archetypal Anti-Christ doing exactly as the Bible predicts and deceiving the shallow and the unwise.
However, it is important to draw lessons from the above piece by Rushdie for African leaders who think they can rule in perpetuity by using ethnicity and religion to divide their people. It may work for them for some time, even a long time in some countries, but that time will finally end and the people will suddenly realise how much they have been brainwashed, hypnotised and hoodwinked by these selfish and unpatriotic leaders. The day is therefore coming, and very soon too, when the people of Africa will wake up from their deep slumber and reject the primordial sentiments, packaged as parochial bigotry and prejudice founded on the insular and divisive tenets and platforms of sectarianism, ethnicity and religious intolerance. Unfortunately, these divisive policies have kept most of us in Africa in bondage almost forever.

Those who have ears to hear and eyes to see should watch out, listen, and see how the death of one man can ignite the fire of togetherness and unity across the world. There have been too many deaths before now. But this is obviously one death too many. The frenzy for equity and justice for George Floyd in particular, and people of colour in general, is reaching fever pitch all around the world. The fire will consume all in its wake who do not see the conflagration reaching out to tear the barriers, shackles, manacles, blinkers and blindfolds that have prevented Blacks from achieving real freedom, egalitarianism and emancipation for themselves. What is becoming clear is that Black people will not wait for these to be handed to them anymore, they will grab it themselves by fire, by force. George Floyd’s blood was not a sweet blood for vampires and, so, it has turned into poison coursing through their infernal veins and internally and eternally worrying and exterminating his killers and their ilk.