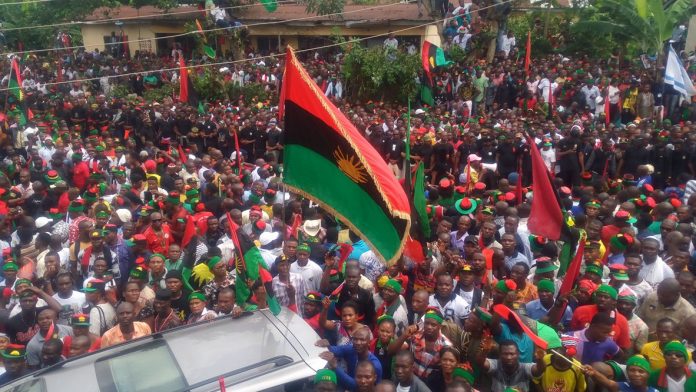 Share
Facebook Twitter LinkedIn Pinterest Email WhatsApp
The proscribed Indigenous People of Biafra, IPOB has denied issuing a sit-at-home directive in the Southeastern part of the country ahead of President Muhammadu Buhari’s visit to Imo State on Thursday.

There have been reports that the secessionist group, during a broadcast on radio Biafra, ordered residents of the region particularly, Imo State to observe a sit-at-home during the president’s visit in solidarity with its leader, Mazi Nnamdi Kanu who is currently in the custody of the Department of State Services, DSS.

But in a statement issued on Wednesday, the Head of Directorate of State, Chika Edoziem, IPOB dismissed the report describing it as a “propaganda being peddled by the enemies of Biafra”.

However, the statement directed IPOB’s security formation, the Eastern Security Network, ESN across the region to ensure that the lives of residents are protected from any external force.

Chika Edoziem explained that the sit-at-home would only be observed in the region when ordered directly by Nnamdi Kanu, stressing that the group would not risk the lives and livelihoods of its people.

The statement reads, “We have been inundated with calls and messages from Umu Biafra and other well-wishers over a viral message purporting our directive for a -at-home order across Biafra land in reaction to the planned visit of President Muhammadu Buhari to our Biafran land.

“The Directorate of State hereby dissociate itself from the propaganda been peddled by the enemies of Biafra. At no point did the directorate issue such circular to Umu Biafra. And we would not encourage anyone who wishes to put the lives of Ndi Biafra on the line by constituting authority upon themselves.

“The only sit-at-home order in Biafra land remains that which will happen any day our leader Mazi Nnamdi Kanu has ordered and approved by the Directorate of State”.

“Let no one be moved by the action of the saboteurs and enemies of Biafra people. We must safeguard our lives and as such, will not be cowed into risking the lives and livelihood of our people.

“By this notice, all Biafra security formations across Biafra Land are directed to ensure the safety of our people as they go about their daily business activities and other engagements tomorrow”.