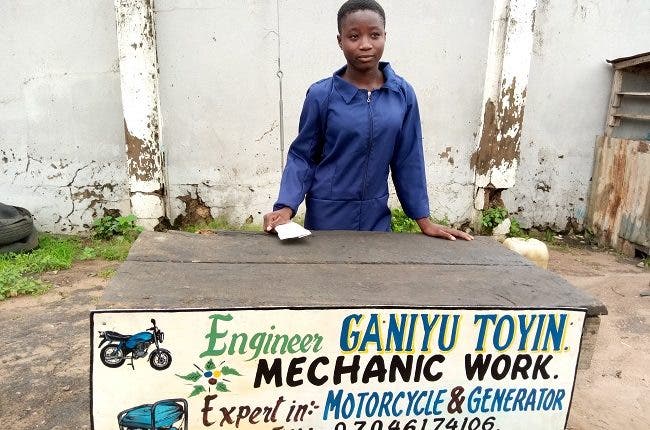 A roadside seventeen-year-old female auto mechanic in Ilorin, Kwara State has been encouraged by a philanthropic organization with financial empowerment to pursue her formal education.

The media gathered that the teenager, Miss Atoyebi Oluwatoyin Abiodun Ganiyu, inherited the mechanical engineering knowledge and expertise from her late father since she was six years old.

Speaking during the surprise presentation of N100,000 financial empowerment to the young girl, the Head, Media and Publicity of Gobir Foundation, Mrs Khadijat Eyitanwa, said that the foundation designed the programme purposely to reward hard work towards increased productivity and taking the state to next level of development.

“We are here to celebrate diligence and hard work in the young professional. We’ve been watching her doing her job well. The recognition programme by the foundation is aimed at celebrating hard-working people. We want people to know that the foundation is watching you and ready to compensate you for a job well done. We are on the lookout for every other person doing well; be it in public or private business. We urge our people to keep up good work to make the state greater.”

Also speaking, the beneficiary, Toyin, as popularly called, an SS 1 student of Chapel Secondary School located in Tanke area of Ilorin metropolis, said she is determined to become a renowned motorcycle and tricycle mechanic and to adopt the profession as a means of livelihood.

“To be a mechanic is my dream and I have planned and I am working hard to be a mechanical engineer in future. I want to be able to build machines on my own,” she said.

She also said that she was determined to take up her father’s job because while her father was alive, he trained, fed, and sheltered her and other members of the family with meagre money he got from being a mechanic.

The media gathered that Toyin’s guardian, Mrs Anna Modupe Esho, took up the responsibility to train her through school and see her succeed as a mechanic even before and after Toyin’s father’s demise.

“We were neighbours. When she was six, I saw her taking interest in mechanic work which her father said she was the only child that was interested in learning. Toyin has over the years proved to be productive, industrious and well-disciplined ever since I have known her.”

Her colleagues in the trade, neighbours and relations, as well as commercial motorcycle riders and tricycle operators, testified to her diligence and hard work, saying she had the potential to go far in the profession.

Highlights of the event was a live music band organized by the foundation, as the teenage female mechanic was made to dance with members of the group, relations and her senior colleagues.