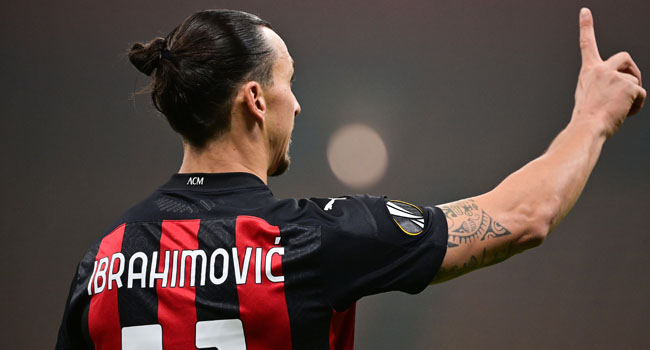 Zlatan Ibrahimovic missed a penalty before scoring a late equaliser as Serie A leaders AC Milan salvaged a point in a 2-2 Serie A draw against Hellas Verona on Sunday to let rivals Juventus and Inter Milan off the hook after both were held 1-1 in earlier games.

“I’ll let Franck Kessie take the next one, that would be better,” said Ibrahimovic, who has now missed four of the last six penalties he has taken for AC Milan.

Stefano Pioli’s side are top of Serie A with a two-point advantage on second-placed Sassuolo, who were held to a goalless draw against Udinese on Friday.

Inter Milan and Atalanta also shared the spoils in Bergamo after Aleksey Miranchuk scored on his first Serie A start for the hosts to cancel out Lautaro Martinez’s header.

Milan had the chance to pull four points clear at the top of the table in the final match before the international break.

But the leaders were two goals down in the San Siro after Antonin Barak opened the scoring in the sixth minute and Milan defender Davide Calabria bundled into his own goal quarter of an hour later.

Ibrahimovic had a chance for the equaliser after 66 minutes, after Verona defender Giangiacomo Magnani’s own goal had reduced the deficit for the hosts.

But the 39-year-old embarrassingly fired over the crossbar before redeeming himself deep into injury time by heading in his eighth league goal this season.

“With so many matches you are not always 100 percent,” said the veteran Swedish striker.

“It was important not to lose. Thank goodness there is a break now, so I rest a little.”

Milan avoided a first league defeat after their 24-match unbeaten run was ended with a Europa League loss to Lille during the week.

Napoli move third after a Victor Osimhen header sealed a 1-0 win over Bologna.

Roma are equal on points with Napoli, both one point ahead of Juventus, after a Henrikh Mkhitaryan hat-trick delivered a 3-1 win at Genoa.

Earlier Juventus once again demonstrated how dependent they are on Portuguese star Ronaldo, letting three points slip after he limped off with an ankle injury with 15 minutes to go.

The 35-year-old had scored his sixth goal in four games and had further chances for a second, rattling the post before Pepe Reina tipped a free-kick over the bar.

Caicedo, who came on early in the second half, once again had the final word.

He picked up a Correa cross and swivelled to fire in the equaliser as Juventus drew for the fourth time in seven league games.

Caicedo also scored in the midweek 1-1 Champions League draw at Zenit Saint-Petersburg and the winner in last weekend’s 4-3 victory at Torino.

“We played like Juventus for 93 minutes and 45 seconds, but then we conceded a goal because we eased off,” said defender Leonardo Bonucci who played his 400th game for Juventus.

Simone Inzaghi’s Lazio, embroiled in coronavirus chaos with star striker Ciro Immobile back in isolation after playing last weekend, are ninth, six points off the leaders.

“This team has heart, difficulties are part of our DNA,” said Inzaghi.

The Roman club are being investigated by the Italian football federation for possible Covid violations after UEFA blocked some players from Champions League games at Club Brugge and Zenit after testing positive.

Both Inter and Atalanta missed the chance to close the gap on the leaders days after Champions League defeats to Real Madrid and Liverpool respectively.

Former Lokomotiv Moscow midfielder Miranchuk came off the bench just before the hour and scored 19 minutes later in his first game for the home side.

Romelu Lukaku returned from a thigh strain, playing the final quarter of an hour, but could not find a winner for Inter.

“We’re lacking a bit of the killer instinct to take home games,” said coach Antonio Conte, whose side are seventh just behind Atalanta.