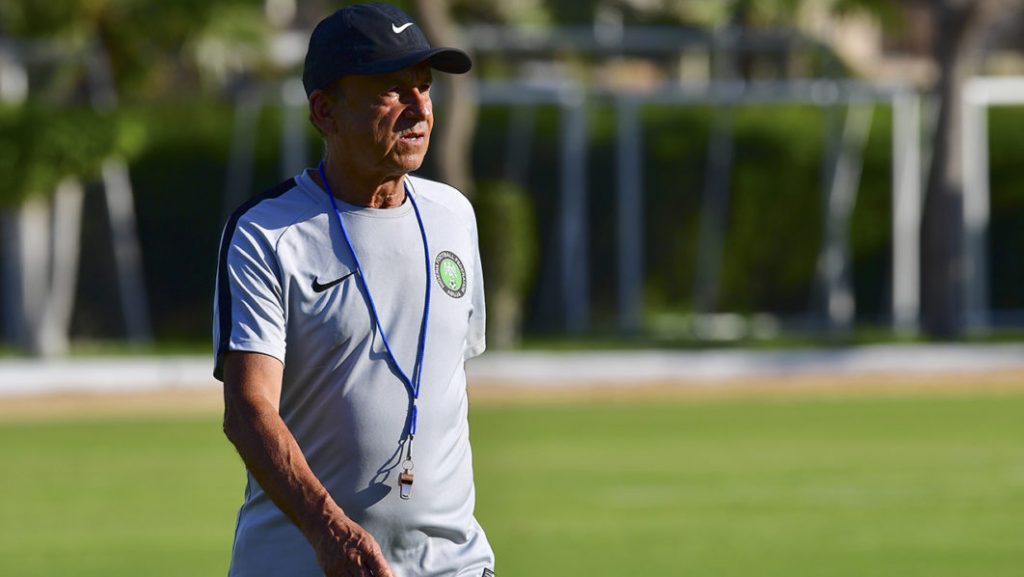 Nigeria Manager Gernot Rohr, who has signed a new contract with the Nigeria Football Federation, has said the Super Eagles are “not number one in Africa” and may not deliver the 2021 Afcon.

The German told BBC Sport Africa he is “happy to continue” with Nigeria and that the new deal was “good for all of us.”

The contract quagmire between the Nigeria Football Federation and their coach, which lasted for over two months, finally came to an end with the announcement by the President of the Federation on Wednesday. But the NFF statement also highlighted a major expectation – that Rohr is to deliver the Afcon 2021 title to Nigeria, something the manager thinks will be difficult, though not impossible.
“When you go to a tournament it is to win it,” Rohr said.

“We finished third in the last one, and everybody wants to progress. But we know also that it is very difficult to win this tournament because we are not number one in Africa.

“But it is good to have these milestones and ambition.”

Rohr, whose new two-and-a-half year contract runs until the 2022 World Cup, also highlighted that he understands the risks of his contract and knows he has to qualify for Qatar.

“My contract all the time is a risk because it is finished when we are eliminated from a competition – whether the Afcon or World Cup,” he explained.

“I took the risk already when I arrived, and it is still the same. But I am very optimistic, because now we have a team which is playing good football and I have confidence in my players.”
Meanwhile, Nigeria international Chibuzor Okonkwo believes Rohr can make the Super Eagles the best team on the African continent.

The Kwara United defender also believes that the 66-year-old coach can win the AFCON title with the Super Eagles.

“He has been doing well and I believed he has a good team which can win trophies for Nigeria. He deserved to continue to be in charge of the Super Eagles,” Okonkwo told Goal.

“Winning the Africa Cup of Nations title is not a tall dream because nothing is impossible and I believe Rohr can do it for Nigeria.

Nigeria have won the AFCON title three times and the last time they won the competition was in 2013.

“He needs to bring in more experienced players to the team, although the present young players at his disposal are doing well,” he added.
“But he needs to blend the team to make it competitive.”