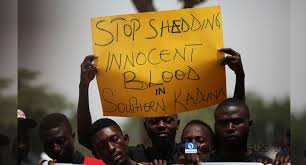 “Life is meaningless; life is cruel. I have lost hope. Those responsible for the killing of my 11 children would never know peace. I asked what was happening and I was told Fulani people invaded our community, killing people and destroying properties. I am one of the oldest women in our community and I have never experienced such calamity. I never knew someday, I would wake up and be chased away from my land by the Fulani whom we have lived with for decades.”

These were lamentations of 93-year-old visually impaired Mrs. Azumi Boka, whose community was among those attacked during the latest attack by suspected armed herdsmen on Gonan Rogo community in Kajuru Local Council, Southern Kaduna, Kaduna State. She lost 11 of her children in the attack.

For natives and inhabitants of Southern Kaduna, times are hard, not just because of the coronavirus disease (COVID-19) and attendant impact on the economy, but also because of worries occasioned by the incessant attacks that have left deaths and destruction in its wake.

This is as the people faulted the state government’s decision to implement the white paper report of the 1992 Zango Kataf crisis amidst the attacks, ostensibly to curtail recurrence, insisting that it is part of the ethnic cleansing and land grabbing agenda.

The current mayhem in Southern Kaduna communities has created a humanitarian crisis in the area, as thousands of displaced inhabitants now live in refugee camps, wallowing in pains.

Besides, the Fulani, under the umbrella of Miyetti Allah Cattle Breeders Association of Nigeria (MACBAN), has defended the actions of their members as self-defence and reprisal against the native militias, who they alleged continue to annihilate their people and cattle.

The recent face-off between the two sides has increased the number of casualties on the side of the indigenous Southern Kaduna inhabitants, who alleged that both the federal and state governments are in support of the armed herdsmen to perpetuate attacks and kill their people, with the purpose of taking over their ancestral lands.

Since Governor Nasir El-Rufai assumed office, the government has been battling with various forms of criminal activities, ranging from kidnapping for ransom to armed banditry, which also occurred mostly in Southern Kaduna.

The latest bloodbath occurred in Jema’aa, Kaura and Zango Kataf Councils, where armed men invaded communities, killing native inhabitants and destroying their homes and properties, making hundreds of them to seek refugee in camps.

when our reporter visited Zango Kataf and Kajuru Councils, where majority of the Internally Displaced Persons (IDPs) were taking refuge under pathetic conditions. According to James Enoch, one of the IDPs, heavily armed militia stormed Sabon Kaura at 11:20pm, hacking down his wife and brother’s wife with her baby, stepmother and his three siblings.

Narrating his ordeal, Enoch said the villagers were initially alerted that their village was going to be attacked, “so, we quickly told our wives and children to move out to one of our neighbouring communities, while we were at the outskirts of the town.

“The attackers invaded our village and started shooting and burning down our houses at exactly 11:20pm. Unknown to me, my wife, my brother’s wife, my stepmother and three siblings had moved to my cousin’s house. The attackers carried out a one-hour operation and left at exactly 12:30am.

“We went back to the village when it was dawn, checking from house to house to see the level of destruction. On reaching my cousin’s house, we discovered five burnt bodies.”

The 36-year-old said his wife and his brother’s wife, with her baby, were slaughtered, while his stepmother and three siblings were all burnt beyond recognition, adding: “Only three of my family members survived the carnage on the night of Friday, July 10 in our village.”

He explained that five of the victims have been buried, while two bodies were still in the mortuary awaiting final internment, lamenting that even when they got information that their village was going to be attacked, they contacted security agencies but there was no response.

Enoch expressed the fear that the attackers were still in the village, saying: “You dare not go to your farms or the village. We are calling on government to deploy security men to the villages and fish out these bandits so that normalcy can return.”

Narrating her ordeal at the IDPs camp at Kara-tudu in Chukun Council, 93-year-old visually impaired Mrs. Boka, said: “I don’t even know how I survived the carnage that befell us that day. The only thing I can remember was the sound of gunshots.

President of Southern Kaduna Peoples Union (SOKAPU), Jonathan Asake, told The Guardian that persistent attack and killings in the midst of 24-hour curfew imposed by the state government in some of the troubled areas showed that “the tactics have never changed, the intent has never changed and the agenda has never changed.”

While accusing the government of grand design and conspiracy to exterminate the people in Southern Kaduna and by extension, the entire Middle Belt areas, Asake said: “If you look at the conspiracy of silence when these killings are taking or take place, the massacre, carnage and destruction and genocide on regular basis, the authorities that ought to take necessary steps to apprehend the perpetrators and bring them to justice would prefer not to do that, but rather use other narratives.

“When the killing is taking place, they would call it communal clash, farmers-herders clash or reprisal attacks. By their utterances, actions or inactions, you will see that genocide is going on and assisted by the authorities that ought to protect us.

“That is why we are crying out to the world. In all this carnage and massacre, not a single time had the President or governor visited any of these communities to see or sympathise with the people affected or even come to see the people displaced from their ancestral homes by these invaders.

“The owners of those communities are now in camps in very dehumanising conditions and they have never made efforts to chase out those people that occupied the land of the natives after invading, killing and raping women and destroying the place.”

On the state government’s decision to revisit the 1992 Zango Kataf crisis white paper, Asake said: “This is part of the agenda. While the invaders are invading the communities and taking the land by force to change demography, the government on the other side is using government power to take over the land. So, they are acting in concert.

“This committee set up by the government to review the 1992 Zango Kataf crisis report 28 years after baffles every rational-minded person. Why is it that the governor has selectively chosen the 1992 Zango Kataf crisis and not the 2011 post-election crisis, where a report of a committee headed by Sheikh Ahmed Lemu, made far-reaching recommendations? Why is he not interested in that? Is it because some powerful people were indicted in that report? If he is truthful on what he is doing, let him revisit that report.

“Why only the 1992 report? In any case, most of the actors have died and over 85 per cent of the recommendations were implemented. The dispute of that crisis was never over land, but over the market location.”

But Director of Media and Publicity, MACBAN, Kaduna State Chapter, Alhaji Ibrahim Bayero, who blamed the natives for the current upheavals, told The Guardian: “The people of Southern Kaduna tribes and Christians, in particular, should stop blaming the current event there on Fulanis. They should stop attacking Fulanis.

“When Fulanis revenge their attacks, they should stop saying that Fulani are engaged in the ethnic cleansing of their people. It is not true, because our people have never attacked any tribe in Southern Kaduna.”

On the recent incident in Zango Kataf, Bayero narrated: “What happened last June was that both the indigenous Fulani and traditional pastoralists, who were on their routine activities and passing by from the north to the south, were ambushed along the cattle routes, killed with their animals, some of which were dispatched in the bushes.

“Up till now, the animals are still wondering in the bushes and nobody can afford to go there, reclaim them and take them to the rightful owners because if they go there, the Kataf militias will kill them.

“When some people armed themselves, attack and kill your people, you will want to revenge. What else will you do, won’t you go and get prepared before you take the revenge? If they don’t want to be attacked, they should not attack in the first place; they should not kill people. If they kill Fulanis, certainly Fulanis will revenge.

“We don’t have our hope in government, as all the policemen are non-Fulanis. The Fulanis don’t depend on government Police or security agents; they revenge and go.”

Bayero gave a vivid account of the fracas in February this year, saying: “There was a court case between two Bajju people at Magriga. The loser was not comfortable and went in the night to kill the person who won the case. He didn’t meet the man, so he killed two of his children.

“The following day, there was tension there and they wanted to start killing the Fulanis, thinking it was the Fulanis that attacked the man and killed two of his children. This man had a problem with another person in the neighbouring Kukum village in Kaura Council, they went there and killed eight Fulani boys taking care of about 80 cows.”

He further argued: “When there was a problem last June between the Hausa and Kataf in Zango Kataf over farmland and one Kataf man, named Yusuf Madaji, was killed and the body found in the disputed land, the militias started killing Hausa, waylaying, demonstrating and stopping vehicles on the highway, bringing down every Muslims they saw in vehicles and killing them.

“They also went into remote areas, burning Fulani houses and killing them, as well as invading cattle routes where the cattle were passing and killed them. When the association of the Fulani and Hausa reported the matter, they even denied that nothing of such nature happened, whereas a few meters away from the chief’s palace, two houses of Fulanis were burnt to ashes and four Fulanis killed.”

Bayero, while criticising those opposed to government’s decision to implement the 1992 Zango Kataf crisis white paper, said that would not cause any problem in the state, adding: “The reason why these people are causing this havoc today is that there was no punishment over the 1992 crisis in Zango Kataf even though the perpetrators were found guilty.

“How can you kill almost 1,000 people and nothing happened; nobody punished? You cannot just be killing people and go free. No government can tolerate such. Successive governments did nothing, now the same problem is repeating itself.”

The 1992 incident occurred during the Gen. Ibrahim Babangida regime, which set up a tribunal, headed by the late Justice Pius Okadigbo to try Maj-Gen. Zamani Lekwot (rtd), the late Major James Atomic Kude (rtd) and other Kataf indigenes on allegation of culpable homicide.

However, Lekwot and others sentenced to death were granted state pardon by the late head of state, Gen. Sani Abacha, on the assumption of office.