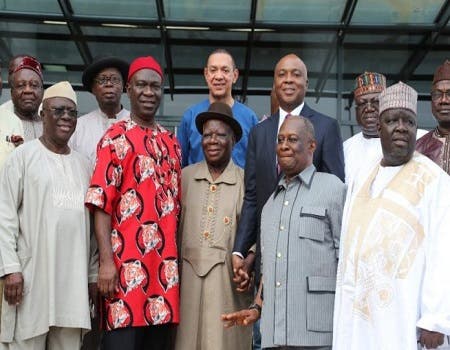 The Southern and Middle Belt Leaders Forum (SMBLF) has told President Muhammadu Buhari to come out of his shell and address Nigerians on critical issues concerning the nation even as it warned that Nigeria will die unless it is restructured.

Setting the tone for the expanded meeting of the group in Abuja on Sunday, its leader, Chief Edwin Clark, said the president must be open to Nigerians.

He said: “The purpose of this meeting is very clear. Where are we going in Nigeria? Some are asking for secession, others for a breakup, others are running a unitary system of government etc.

“Time is moving fast and there is the need to state our position very clear to Nigerians.

“Mr President is not an emperor, he is not a king, he is not a monarch, he is a politician. He should come out and meet some of us who were here before he was an ordinary soldier. This country belongs to all of us, the north alone or the south alone cannot rule this country.”

He noted that Nigeria is presently running a unitary system of government, which he said is a hangover from the military.

“Secondly, we want the zoning to continue. It is constitutional.”

He stressed the need for the 2023 presidency to be zoned to the south since the north would have eight years at the end of Buhari’s tenure. According him, even though zoning is not constitutional, it is conventional and needed to keep the country together.

The communique issued at the end of the meeting read by Dr. Pogu Bitrus, Chairman of the Middle Belt Forum, emphasised the group’s position on restructuring and zoning while urging southern politicians to reject any party position apart from the presidency in 2023.

It also called on President Buhari to heed the calls for a national dialogue to thrash out contending issues facing the country. The group expressed opposition to the use of federal or state finances to fund private cattle business other than providing enabling environment for owners.

The group in the communiqué: “Urges the Federal Government to heed the genuine and reasonable nationwide calls for a transparent National Dialogue, and take urgent steps towards restructuring and birthing a new Constitution; to bring back equitable harmony to the Country; “Insists that it is imperative to immediately restructure the country considering the precarious prevailing atmosphere before any further elections.

“Notes that the Northern part of the Country would have fully enjoyed the Office of the Presidency, for the full statutory period of 8 years by 2023, hence, should yield to the South.” The communique added that the group

“Unequivocally and in full resolve, calls on the APC and PDP and other political parties to zone the Presidency, in 2023 to the South; at the next election.

“Enjoins political stakeholders from the South not to be lured into the unpatriotic step of seeking such other positions as National Chairmen and Vice President of the main political parties, but join forces to demand and ensure that the Presidency moves to the South in 2023;

“Calls on the Federal Government to declare a national emergency on security and urgently come up with proactive strategies to restore peace and security to all parts of the country;

“Emphasizes that, if the security situation is not dealt with and banditry stopped or reduced to the barest minimum, it would not be feasible to have proper elections in 2023;

“Condemns the cavalier attitude of the federal government towards the resolutions of the Governors of Southern States at their Meeting, held in Asaba, Delta State on 11th May 2021;as it pertains to ban on open grazing and restructuring.

“Insists that cattle rearing is a generally, private business enterprise, as such, the Federal Government should avoid committing state resources to promote any particular business, beyond providing the enabling environment, in the performance of its regulatory roles.”