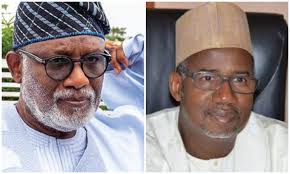 Ondo State Governor, Rotimi Akeredolu, has described as “provoking and insensitive”, the comments made by his Bauchi State counterpart, Bala Mohammed, that Nigerians don’t need Akeredolu’s permission to live in Ondo forests.

Akeredolu also warned Mohammed not to set the country on fire with his rhetorics.

The PUNCH had earlier reported that in a bid to sanitise Ondo forests of killer herdsmen accused of sundry crimes such as kidnappings, killings, rape, amongst others, Akeredolu ordered all herdsmen to vacate the state forest reserves or register with the state government.

The development generated outrage with the Presidency and some governors including Mohammed saying Akeredolu lacked the right to issue a vacation notice to herders in the state.

“Land is in the hands of the state and federal governments in trust but Nigerians don’t need the permission of governors or the federal government to settle everywhere. You don’t need the permission of the governor of Bauchi or the governor of Ondo to be in the forests of Ondo if you choose to live in the forests because under Section 41 of the constitution, you are free to settle anywhere,” the Bauchi State governor had said on Friday.

Reacting in a statement through his Special Assistant on New Media, Olabode Olatunde, Akeredolu urged Nigerians to disregard Mohammed’s comments.

The statement partly read, “The position of Governor Oluwarotimi Akeredolu, SAN, is not to engage or confront anyone who has the mindset of a crisis entrepreneur or war monger. Very provoking and insensitive as the statement appears, we can only err on the side of caution by advising Governor Bala Mohammed not set Nigeria on fire by his thoughts that are highly destructive and undermining national cohesion.

“Nigerians should ignore him and rather focus on those issues that can bring about peace and engender unity.”
Akeredolu had also slammed Mohammed for saying herders have the right to bear AK-47 rifle for self-protection.