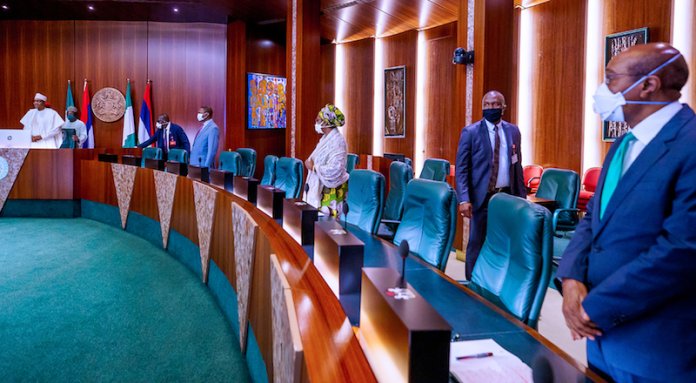 A delegation of the Nigeria Governors’ Forum (NGF) yesterday told President Muhammadu Buhari that it was wrong for the federal government to appropriate dividends from the Nigeria Liquefied Natural Gas (NLNG) Limited without remitting it to the Federation Account.

According to a reliable source, the governors during a virtual meeting with the president, argued that the company was a national asset and proceeds from it like oil revenue, ought to be remitted to the Federation Account for distribution to the three tiers of government.

We also gathered that the governors have also kicked against what they described as excessive deductions from the Federation Account, which they say reduce the cash available for sharing among the three tiers of government.

The governors reportedly cited such deductions for Police Trust Fund, North-East Development Commission and Primary Health Care Fund, which are first-line charges on the Federation Account, arguing that such funds should be charged to the federal government’s share of the central pool.

The governors, just like heads of other tiers of government, have been battling fiscal crisis since the double crises of COVID-19 pandemic and the sharp decline in oil prices occasioned a sharp decline in revenue inflows into the Federation Account.
Our findings showed that the governors’ advocacy, if it sails through, will widen the income inflows into the Federation Account and make more cash available for distribution among the federal, state, and local governments.

It was gathered that the governors, in their meeting held last Thursday under the auspices of NGF, wrote to the president seeking an audience to discuss four principal issues, including the ownership of the NLNG Limited, continued deductions from the Federal Allocation Account Committee (FAAC), management and co-ordination of COVID-19 and Basic Health Provision Fund.

The president, it was learnt, replied the governors and fixed yesterday for the meeting.
The NGF selected eight governors, including the NGF Chairman and Ekiti State Governor, Dr. Kayode Fayemi, to lead the delegation to a teleconference with the president.

According to a source privy to the meeting, also discussed was the shortfall of revenue accruable to the FAAC, which was due to what a governor described as “too many deductions from the Federation Account.”

One of the governors at the meeting confided in THISDAY that they expressed concern about how the proceeds from the NLNG are being managed exclusively by the federal government and are not remitted to the Federation Account like oil revenues.

The governor said they requested that the proceeds from the NLNG be channelled to the Federation Account and shared by the three tiers of government just the same way the proceeds of crude oil revenue are shared.

It was gathered that the governors complained over the distribution of palliatives by the Presidential Task Force on COVID-19 as well the coordination of the pandemic fight.
We learnt no decision was reached and the meeting was adjourned to another date to enable the president consult with his cabinet over the issues raised by the governors.