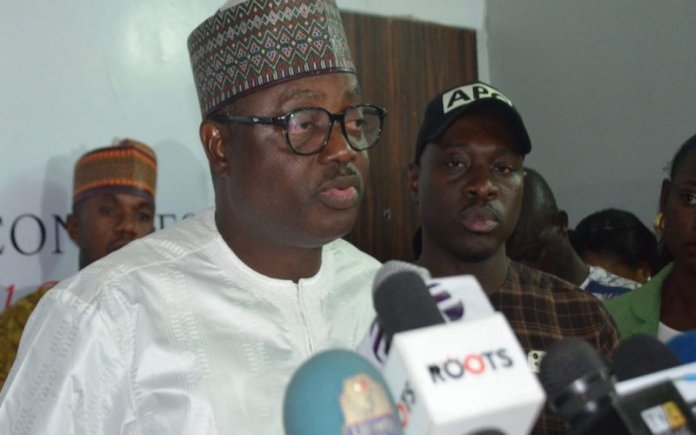 All Progressives Congress (APC) would today release the timetable for the party’s primaries for Ondo State governorship election.

Issa-Onilu, however, said the party had not decided on the mode of primary to be used to select the party’s governorship candidate.
“The party has to meet to decide. The timetable for Ondo governorship election will be released today or tomorrow,” he stated.

Meanwhile, the National Chairman of the party, Mr. Adams Oshiomhole, yesterday inaugurated Mr. Waziri Bulama as the National Secretary of the ruling party.
The choice of Bulama initially caused a major crisis within the party that almost cost Oshiomhole his job before President Muhammadu Buhari reconciled the feuding factions within the National Working Committee (NWC) of the party.

Speaking after taking the office, Bulama said he was honoured to assume responsibility as the national secretary of the party.
He added that the party was conceived by visionary leaders with good intentions to serve the people.

Bulama noted that the success of the party in 2019 general election was achieved through the leadership provided by Buhari, the governors, Oshiomhole, and its members.

He said: “I want to assure you Mr. Chairman and all party leaders that I will work with my colleagues to ensure that the party works harmoniously as a party and to consolidate on the success of the party.”

In attendance were Borno State Governor, Prof. Babagana Zulum, and his Gombe State counterpart, Alhaji Mohammed Inuwa.
Inuwa said: “I am very happy that it ended this way. It took some time for us to have this replacement but what is more important is that at the end of the day we are able to come to a resolution and the new national secretary has been sworn in today. We hope he will work with previous leaders and consolidate on the gains of the party.

“I know Bulama in the last 40 years. I know that he is a person of impeccable character, a person that you can vouch for and he is very hard working. He knows what to do. In fact, he has already started doing that trying to work and carry everybody along so that APC should deliver on its mandate and that is what he is going to do.”

JUST IN: Churches, Mosques To Reopen As FG Lifts Ban On...

The Economy Of Nigeria Is In Labour Room And Depature Lounge...

Many ministers have lost their bearing, calling, because they followed men...

There is Hope for those who put their trust on...

JUST IN: Churches, Mosques To Reopen As FG Lifts Ban On...