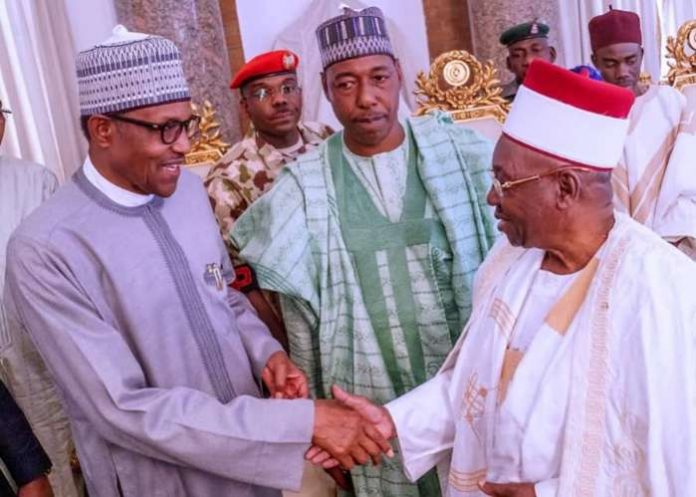 Governor Babagana Umara Zulum of Borno State has reaffirmed that believe of the people of the State in the sincerity of President c in the fight against Boko Haram insurgency.

The Governor issued the statement in appreciation of the President’s visit to Maiduguri last Wednesday to commiserate with the people following Boko Haram killing of 30 persons and burning of several vehicles at a checkpoint outside the capital city Sunday.

President Buhari was booed by some residents of the city who believed that he has not done enough to end loss of lives in attacks by Boko Haram in the State.

But in a statement, his spokesman, Malam Isa Gusau, Governor Zulum said the President’s dedication to ending Boko Haram war has never be in doubt.

Governor Zulum was quoted to have said, “Mr President, Sir, your empathy for the good people of Borno state has never been with the slightest doubt. In fact, it has been so obvious.

“Your trip to Maiduguri on Wednesday, straight from an international engagement strongly reinforced what we already know of your compassion for the people of Borno.

“Your visit was more than show of empathy. It strengthened our hope especially because in private, you gave us listening ears with reaffirmation of the commitment you have always had, to ending the boko haram insurgency.

“It is public knowledge that you have since day one of assuming office, made our security, humanitarian and economic situation topmost in your list of national priorities.

“Mr President, Sir, Borno has not and will not lose hope in you. We believe in you because no one can correctly question your sincerity of purpose.

“We will continue to hope and pray that uses your presidency to grant us enduring peace and security in Borno state, rest of the northeast and the while of our dear country, Nigeria.”