FG to Transfer 613 Rehabilitated Repentant Terrorists to Their States 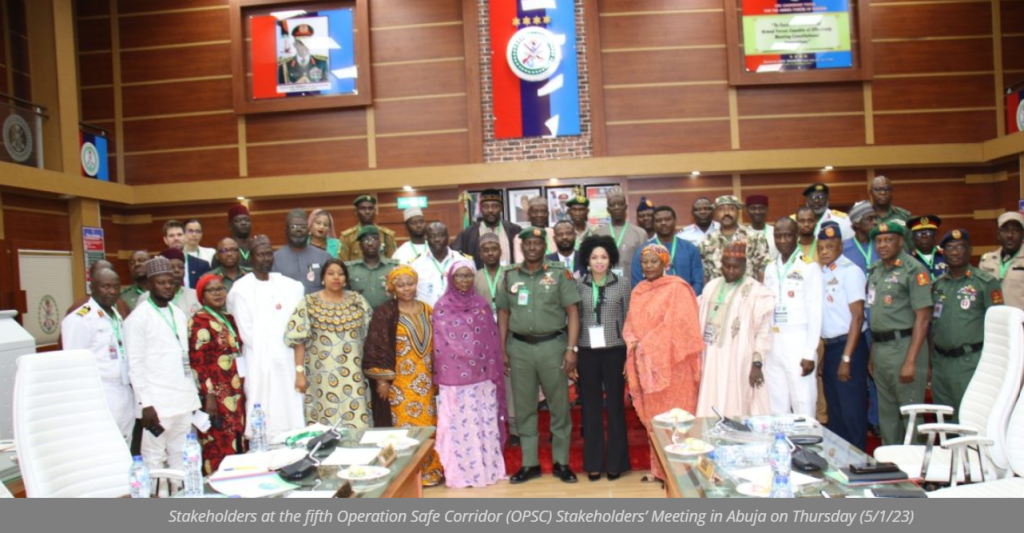 The Chief of Defence Staff (CDS), Gen. Lucky Irabor says 613 rehabilitated low-risk repentant terrorists will be transferred to their state governments for reintegration into society.

Irabor made the disclosure during the fifth Stakeholders’ Meeting of Operation Safe Corridor (OPSC), on Thursday in Abuja.

Represented by the Chief of Defence Training and Operation, Maj.-Gen. Adeyemi Yekini, the CDS said the 613 clients are currently undergoing deradicalization and rehabilitation handled by the OPSC.

He said that the meeting would exhaustively discuss the Deradicalization, Rehabilitation and Reintegration (DRR) Programme ahead of the transfer of the rehabilitated clients to their state governments.

Irabor said the OPSC was established by President Muhammadu Buhari in September 2015 as a window for willing and repentant terrorists to lay down their arms and undergo a structured DRR programme.

He added that the scheme was a multi-agency and humanitarian operation utilising the expertise of over 17 services, ministries, departments and agencies, supported by local and international organisations and friendly nations.

The CDS said the successes of OPSC had continued to resonate within the region and in the diaspora, thereby attracting the interest of researchers from far and wide.

“It is also important to mention that upon graduation from the programme, each client will be provided some food and personal items, as well as a start-up pack according to the trade learnt during training to enable them to set up small businesses and start a new life.”

Irabor recommended that the receiving state governments should provide the necessary support to enable the ex-combatants to wade through the transitional and most challenging phase of their lives.

“We are optimistic that working closely with local and traditional authorities, the states can deploy security apparatus at their disposal to effectively track and evaluate the re-integrated ex-combatants.

“I must emphasise that it is critical for all stakeholders involved in the reintegration processes in order to mitigate, or completely eliminate incidences of recidivism,” he said.

Irabor said the Armed Forces had significantly degraded Boko Haram and Islamic State terrorists and restricted them to a small portion of Sambisa Forest and isolated islands on the Lake Chad.

According to him, through consistent and effective air interdictions along with well-coordinated clearance operations on positively identified strongholds of the insurgents, troops have continued to inflict heavy casualties on the groups and their leadership.

“These sustained operations continue to put pressure and confusion within the ranks of the adversary causing many to surrender to the armed forces.

“As at today, over 83,000 insurgents and their family members have surrendered, while those captured have been tried and convicted to various jail terms by the law courts.

“As we speak, many more captured combatants are being held in several correctional facilities and their trial is ongoing,” Irabor said.

The CDS said that the military has been adopting kinetic and non-kinetic methods to win the war against insurgency.

“I must emphasise that counterinsurgency operation is dynamic and requires a lot of ingenuity and proactive strategies to achieve success.

“One of such strategies adopted by the Federal Government is by extending an olive branch to low-profile members of the insurgent groups who form the critical mass,” he said.

The Coordinator of OPSC, Maj.-Gen. Joseph Maina said the programme had successfully processed 1,573 clients comprising 1,555 Nigerians and 18 foreign nationals from Cameroon, Chad and Niger since its commencement in 2016.

Maina said that all the foreign clients were transferred to their respective countries for reintegration.

He said that the 613 clients were transferred to the DRR camp on Sept. 8, 2022 to commence training, adding that among them were five foreigners from Chad and Niger.

The OPSC coordinator disclosed that 19 of the clients have been transferred to the University of Maiduguri Teaching Hospital neurological center for expert psychiatric management.

On the meeting, Maina said it was to work out modalities for the smooth transfer of the clients to  their national and states authorities for reintegration after graduation in February.

“Specifically, at the end of this meeting, all stakeholders would be fully abreast with activities of OPSC and DRR Programme in particular.

“The State authorities and the MDAs would know in specific terms, the roles they would play in the transfer as well as reintegration process of the clients.

“Identify and recommend in specific terms affordable resettlement package for the clients and assign responsibility to relevant MDAs to provide.

“Determine the mode of community sensitization, camp visitation and community service programmes to take and ratify the graduation date and initiate arrangements for the ceremony,” he said.

The Secretary to the Government of Adamawa, Mallam Bashiru Ahmad, said the state had been collaborating with OPSC to bring clients’ parent together and prepare communities to receive them after deradicalisation.

He said they were at the stakeholders’ meeting to look at what could be done to ensure the effectiveness of the programme and expressed optimism that the effort would yield the desired result.

On her part, Borno Commissioner for Women affairs and Social Development, Hajiya Zuwaira Gambo, said the state had received the largest chunk of the repentant terrorists since the programme started.

Gambo assured that the state would continue to assess the clients even after graduation from OPSC in Gombe to ensure that there were ready for reintegration into their communities.

According to her, the repentant terrorists live with their families in Borno camps while the camp in Gombe only allows families visits.

She called for more support from federal government and relevant stakeholders for the state government achieve its desired objective.