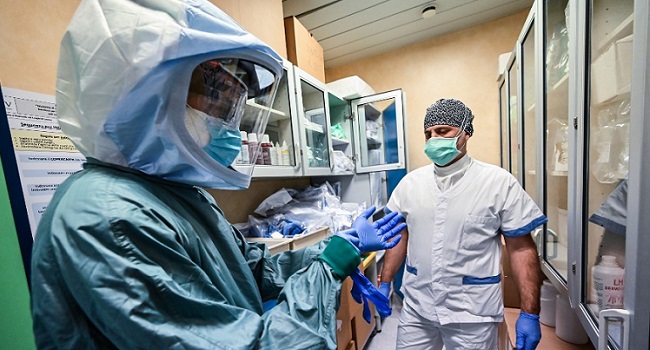 Europe’s most powerful countries urged the European Union to better prepare for the next pandemic after chaotic responses to the coronavirus, as Moscow emerged from lockdown despite Russia still being in the grip of a surging epidemic.

There should be a “common European approach” to challenges like COVID-19 in future, leaders including French President Emmanuel Macron and German Chancellor Angela Merkel wrote in a letter and policy paper to the European Union’s top official.

Europe has been the hardest-hit continent with nearly 185,000 people killed, and the leaders said a lack of coordination had left nations short of crucial medical equipment when the coronavirus arrived.

The United States recorded 819 deaths in the past 24 hours, bringing its own grisly toll to more than 111,000 out of 1.9 million cases — leaving it the country hardest hit by the pandemic in terms of both the number of fatalities and the number of cases.

And the crisis continued to escalate in Latin America, which by late Tuesday had almost 1.4 million cases and nearly 70,000 deaths.

Brazil’s health ministry cited figures late Tuesday indicating the death toll had risen by 1,272 to over 38,400 killed by the virus — the third highest toll in the world after the US and Britain.

However, the government was forced into a U-turn by a Supreme Court ruling on Monday that it must return to the old format, which government critics said is more transparent.

On Tuesday Peru, second only to Brazil as the region’s worst-hit country, announced it had passed 200,000 cases of the virus, adding more than 4,000 cases in a single day.

In Nicaragua, at least eight public health doctors were sacked for criticizing the lack of a serious response to the crisis from the government of President Daniel Ortega, an independent medical body said.

Nicaragua has been criticized for an almost complete absence of measures to contain the virus.

Despite Europe’s dire record, most countries on the continent continued to exit their punishing lockdowns on Tuesday, with Cyprus welcoming its first tourist flights in almost three months and French officials announcing the Eiffel Tower will reopen on June 25.

Residents of the Moscow flocked to parks after officials lifted restrictions in place since March 30, even though 8,595 new cases were registered in Russia on Tuesday and the death toll passed 6,000.

“It’s nice out and there are a lot of people on the streets,” said marketing manager Olga Ivanova, walking in the Russian capital. “It’s a beautiful day, in every sense of the word.”

Russia has the third-highest number of confirmed infections in the world after the United States and Brazil, but officials say this is due to a huge testing campaign and point to a relatively low mortality rate.

However, critics say the death rate is being under-reported and accuse officials of rushing to lift restrictions for political reasons.

In further signs that a new normal is taking hold in Europe, officials in Spain said mask-wearing in public would be compulsory until an effective treatment or vaccine can be found.

Britain, which on Tuesday announced its death toll had passed 50,000, has imposed a two-week quarantine for anyone coming into the country, British nationals included.

The World Health Organization has warned that complacency is the biggest threat in countries where the pandemic seems to have abated.

Globally, it does not appear to be abating at all: the WHO said a record number of new coronavirus cases were recorded worldwide on Monday, the majority of them in South Asia and the Americas.

Underlining the warning, deaths and infections continue to climb sharply in India even as the government lifted some curbs after a 10-week lockdown.

Authorities in the capital Delhi warned on Tuesday that cases in the city could shoot up almost 20 times to more than 500,000 in the coming weeks.

The disease emerged in China late last year before sweeping the globe, subjecting billions to some form of lockdown that paralysed economies.

Those restrictions prevented 3.1 million deaths in 11 European countries alone, according to an Imperial College London study published on Monday.