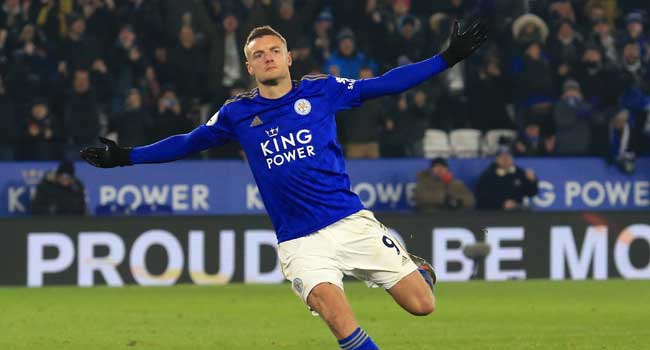 Jamie Vardy won the Premier League Golden Boot for the first time in his career on Sunday despite a poor end to the season for Leicester City that saw them miss out on the Champions League.

England forward Vardy, 33, became the oldest player to win the award for the league’s top scorer after netting 23 goals, one more than Arsenal striker Pierre-Emerick Aubameyang and Southampton’s Danny Ings.

With Chelsea ensuring a top-four finish with a 2-0 win over Wolverhampton Wanderers, Vardy drew a blank as the Foxes failed to gain the win against Manchester United that they needed to leapfrog Ole Gunnar Solskjaer’s side into the top four.

Vardy came closest for Leicester in Sunday’s 2-0 defeat at the King Power Stadium when he hit the bar on the hour mark.

Ederson took the Golden Glove award for the cleanest sheets after Manchester City’s 5-0 win over relegated Norwich took him to 16 for the season.

He finished one ahead of Burnley stopper Nick Pope, whose team suffered a 2-1 home defeat to Brighton.