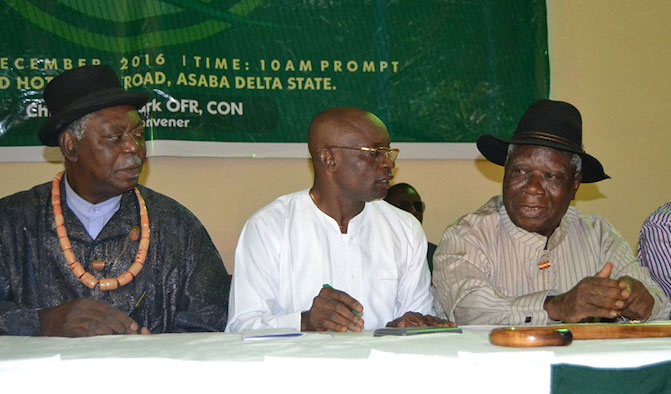 The Delta State government in Nigeria on Tuesday faulted the decision of the federal government to spend the £4.2 million forfeited by associates of a former governor of the state, Chief James Ibori, on the completion of the Second Niger Bridge, Abuja-Kano Expressway and the Lagos-Ibadan Expressway under the coordination of the Nigeria Social Investment Authority (NSIA).

Delta Elders’ Forum (DEF), led by a former Minister of Information, Chief Edwin Clark, also opposed the plan of the federal government to use the funds to complete roads in other states when federal roads in the state are in deplorable condition.

The forum also found as unacceptable the argument of the Attorney-General of the Federation and Minister of Justice, Mr. Abubakar Malami, that the federal government is appropriating the funds because the offenders committed a federal offence, contending that in the similar case of forfeiture by former governor of Bayelsa State, Chief Dieprieye Alamieyeseigha, the repatriated funds went to the state.

Ibori, in 2012, had pleaded guilty to money laundering and other charges in a UK court and was consequently sentenced to 13 years imprisonment.

Some of his associates were also convicted and sentenced to prison over similar charges.

The United Kingdom is now set to return the £4.2 million recovered from associates of Ibori to Nigeria.

The UK and Nigeria on Tuesday signed a Memorandum of Understanding (MoU) in Abuja to kick-start the process.

Malami, who signed on behalf of the federal government, said in consonance with existing framework engaged in the management of previous recoveries, the Federal Executive Council had directed that the repatriated funds should be spent on completing the Second Niger Bridge, Abuja-Kano Expressway and the Lagos-Ibadan Expressway under the coordination of the NSIA.

He stated that roads in Delta State were also in deplorable condition, adding that the federal government should know that the roads also needed attention.

Clark served notice that his group would challenge the federal government’s decision in court as the money belongs to Delta State.

“We see it as a sign of deliberate oppression and provocation of our people. Perhaps, they are tired of Niger Delta. If that is the situation, let them go on since what they want is a problem in the Niger Delta. We cannot be taken for granted in our country.

“As I earlier said, we are ready to go to court on this money. It belongs to Delta and should be used in Delta State and we will not allow this oppression to continue,” he added.

However, at the signing of the MoU yesterday, Malami described the event as “another major milestone in our determined quest as a nation to attain full recovery of all looted assets, prevent abuse of recovered assets and also to ensure optimal utilisation of such recovered assets for the benefit of our deserving citizens.”

He stated that Nigeria provided the required mutual assistance and backup to the British authorities while the prosecution of Ibori lasted in London.

“I cannot but observe that what we are witnessing today is a glaring manifestation of the age-long national ties between the Federal Republic of Nigeria and the United Kingdom.

“I am confident that both the Nigerian and British governments remain committed to all affirmative actions to combat corruption/illicit financial flows, ensure that looters do not find comfort or save haven in our territories and also to guarantee that the forfeited or recovered proceeds of corruption are deployed to the benefit of the masses,” he said.

The AGF stated that in consonance with the framework engaged in the management of previous recoveries, the Federal Executive Council directed that the instant repatriated funds should be deployed towards the completion of the Second Niger Bridge, Abuja–Kano Expressway and the Lagos – Ibadan Expressway under the coordination of the Nigeria Social Investment Authority (NSIA).

The decision, he added, is to ensure the integrity of the process, while a reputable civil society organisation has been engaged to monitor the expenditure of the recovered funds on the execution of the critical projects, which are evenly spread across the country.

He commended the sincerity of purpose of the British government even as he noted that Nigeria looks forward to similar assistance and cooperation in bringing to book all other persons and entities who at the moment are inequitably exploiting the system in the UK to shield themselves from justice.

The British High Commissioner, Ms. Catriona Laing, in her remarks, stated that the signing of the agreement, apart from showing the two countries’ determination to lead the way in a coordinated global effort to bring corrupt individuals to justice sent a clear message to Nigerians that the former governor had been held to account.

Laing said the agreement further demonstrated that money obtained through criminality or corruption is not welcome in the UK, adding that the UK will ensure that the full weight of the law enforcement to crack down upon those who look to use, move or hide their proceeds of crime in the UK.

“It is vitally important that this agreement makes strong provision for transparency, monitoring and accountability. It is a guiding principle of both the UK and Nigerian governments that stolen assets should be used for projects that benefit Nigeria’s poor,” she said.

According to her, the £4.2 million would be made available to Nigeria “in the next couple of days.”

Earlier, the Solicitor-General of the Federation and Permanent Secretary, Ministry of Justice, Mr. Dayo Apata (SAN), had said the ministry, in fighting corruption, had formulated National Strategies and Action Plans; Pursuit of Recovery of Looted Funds; and Assets and Issuance of Assets Tracing, Recovery and Management Regulations.

He listed other actions to include the setting up of Inter-ministerial Presidential Committee on the Disposal of Forfeited Assets; Central Database for Recovered Assets; drafting of bills to stifle corrupt practices; implementation of Whistle Blower Policy and the issuance of Executive Orders Six, Eight and Ten.

Meanwhile, the Oghara Development Union, (ODU) Lagos Branch, has called on the federal government to ensure the return to Nigeria of all the funds recovered from Ibori’s associates in the London trial.

The union said in a statement yesterday by the General-Secretary, Mr. Sunday Agbofodoh, that it stood with Ibori in maintaining his innocence, “and so without conceding that Ibori was guilty as charged, and specifying that the forfeited houses were not bought with illicit funds, we nevertheless call on Nigeria to insist that the full worth of the three buildings seized through a court order, be repatriated to Nigeria.”

Reacting to plans to return the £4.2 million forfeited by three female associates of Ibori in the London case, the union said as the United Kingdom claimed to be acting without ulterior motives on Nigeria’s behalf, that all the monies forfeited should be returned to Nigeria.

The union said it had followed the case diligently and was aware that the sum the women forfeited was £6.2 million and not £4.2 million.

It said Nigeria should oppose UK’s hypocrisy and insist that the entire sum be returned to Nigeria or UK would have been engaged in witch-hunting Ibori for profit, by withholding £2 million.

The union also urged Nigeria to demand the interest on the £6.2 million since 2012 because the money would not have sat idly in the bank without attracting interest.

The union said that all assets linked to Ibori were purchased using funds lawfully and properly obtained, adding that some were bought before Ibori became governor.

It stated that Ibori’s businesses and the monies that accrued to them were not hidden from the London and Nigerian “persecutors”.

According to the union, the London police filed in court a paper which showed that one of Ibori’s companies, MER Engineering, was earning over $7 million annually.

“The forfeited London house linked to the first lady of Delta State when Ibori was governor, the Hampstead property, is owned by a family trust. The property was purchased by the company, MER Engineering, which shareholding was held by his family trust. MER had obtained a facility loan from NNB, a Nigerian bank. The value of this property at the time of its purchase was £2.1 million, which was covered by the NNB facility of well over £3 million meant for working capital and financing of assets,” the union said.

It described Udoamaka as a successful businesswoman as can be seen from the facility letter dated 19 December 2005 from a bank in favour of her company, Sagicon Nig, Ltd for N121 million (£1.5 million).

“The third property, very modest, belonged to Ibori’s sister, a UK resident, which she purchased for £140, 000. Her husband is a former federal permanent secretary,” the union added.