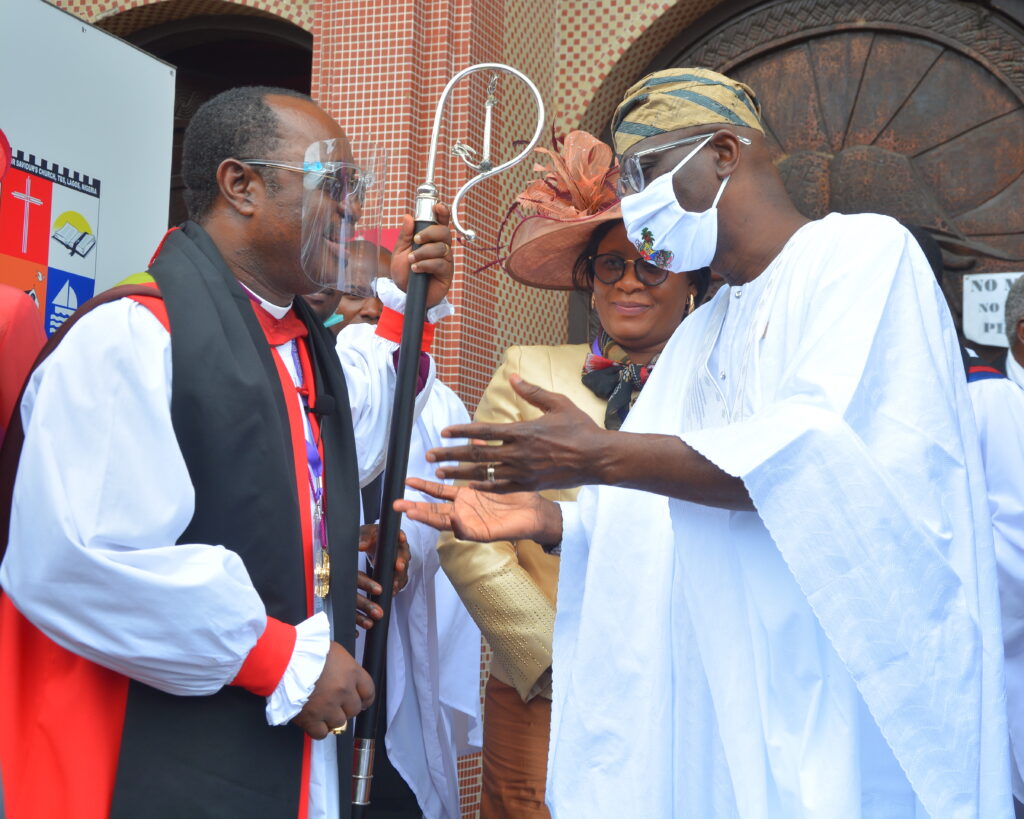 Governor of Lagos State, Babajide Sanwo-Olu who is a dedicated member of Lagos Diocese (Anglican Communion) attended and indeed kicked off the Second Session of the 34th Synod of the diocese which has the theme ‘Pray, Serve and Grow.’

Sanwo-Olu said the church was a pillar of support to the state during the pandemic through prayers, medical equipment and financial assistance. He sympathized with those who lost their loved ones also brought encouraging news to Lagosians that the Covid-19 curve is flattening.

“Your special prayers have held us together. The church has participated in various activities during the lockdown, making provisions to citizens and parishioners, in foodstuff, medical equipment. I thank you for your support to the government and the people of Lagos State,”Sanwo-Olu stated.

The Governor stated that it was envisaged that Lagos State would be picking dead bodies on the streets, and expressed gratitude to God who kept everyone safe from the pandemic.

“We have less than two percent fatality, when the statistics said that it will be 10 to 15 per cent.We had estimated that by August, the curve would have flat out – meaning that the positivity rate would have flattened, and we will begin to see a downward trend. I am happy to inform the people of God that the curve is coming down,and we are beginning to see a low number in the positivity of the COVID-19 in the state,” he said.

“As a government, we will continue to do our best to save lives. We also urged the church to pray for the state government. We acknowledge our limitations as human beings, so we need the Supreme, who knows all and is in-charge of all circumstances. As a government, we are indeed lucky because the church stood behind us, understood what the challenges were and you worked with us.”

He said that though Lagos State residents are not out of the woods yet, they need to take precautions, even as the numbers are coming down. “Lagos, the epicentre, indeed has risen up to it and we are beginning to see the numbers coming down on a daily basis.”

Sanwo-Olu who sympathized with those who lost their loved ones prayed that God will spare lives of everyone. “As a government, we will continue our best to save lives.We also urged the church to pray for the state government. We acknowledge our limitations as human beings, so we need the Supreme, who knows all and is in-charge of all circumstances. As a government, we are indeed lucky because the church stood behind us, understood what the challenges were and you worked with us.”

The Governor referred to the story of Daniel in the Bible, who survived in the Lion’s den through prayers, pointing out that COVID-19 has shown in reality that prayers are needed always. “We need to pray, we need to serve, whatever we find ourselves doing, let us do it well with the best intentions, because we do not know who is watching.”

He stated that to build a “Greater Lagos, everyone certainly needs to hold on to God, to continue to pray and use God as an instrument for contact for all.”

President of the Synod and Diocesan Bishop of Lagos, Rt. Rev. Humphrey Olumakaiye said the gathering was for all to register an unreserved appreciation and gratitude to God almighty,for seeing everyone through the devastating season of global outbreak of an infectious pandemic disease (COVID-19), which befell the world, not too long after the New Year began.

He said it is unfortunate that till this moment, there are yet no specific vaccines or absolute treatments, even though there are many ongoing clinical trials with evaluating potentials.

Olumakaiye who commended Sanwo-Olu for his good foot prints in the state, especially at the COVID-19 period, thanked God for using him to bless the Anglican Church and the entire Lagos residents.

“The governor has approved the construction of roads leading to our Centenary City at Ibeju Lekki. We recognize with immense sense of pride and fulfillment, your impressive commitments to the achievement of a greater Lagos of our dream, and we can see that being actualized through the giant strides you are making in virtually every sector of the state’s developmental corridors, especially as encapsulated in your well-conceived , highly-impactful and far-reaching social transformational agenda, tagged; Project T.H.E.M.E.S.”

The cleric assured the governor of moral and prayerful support as a church.

Olumakaiye also decried the recent hike in fuel and electricity tariffs, calling on the Federal Government to make jettison the policy in the interest of the masses.

Olumakaiye maintained that if there was any need for increment of any commodity it should not be at this period of Covid-19 pandemic “It is heart-rending that all these are coming up at a time ‘when we are just trying to get over the hassle brought upon us as individuals and collectively by the much dreaded Corona Virus.”

Olumakaiye stated that lives were lost and businesses have not recovered and as such the increment in fuel and electricity tariffs was ill-timed “In the course of the pandemic, many lost their jobs; some lost their loved ones while many businesses went down and many investments yet to yield.Crime rate also increased in the country while some even went as far as committing suicide when all hope was lost.”

He asserted that fuel and electricity were essential palliatives that could go round without been shortchanged. “At a time like this, putting manifestoes aside, the government should seek the comfort of all the citizens. Truth be told, fuel and electricity’ are the essential palliatives that can go round without been shortchanged. We should bear in mind that, increase in electricity tariff and fuel price will definitely tell on other commodities and the poor masses are always at the receiving end.”

Olumakaiye advised the Government of President Mohammadu Buhari to have a change of heart aimed at reducing the burden faced by them asses. He also queried the inability of government to fix refineries in order to produce fuel locally. “The poor masses should be able to find solace in the government now and not otherwise. Government should aim at reducing burdens now and not increasing them.

“It baffles one that a whole nation like ours is finding it hard to fix our refineries, when a single individual is building one, yet we keep wasting billions of naira on many other things; so much that it becomes easy for some people to pocket.

“It’s high time we made our refineries work and ensure transparency at all levels. We can do this if only we have the will to-do it.Our President should not be ill-advised on the things that most affect the welfare of the masses,” Olumakaiye stated.