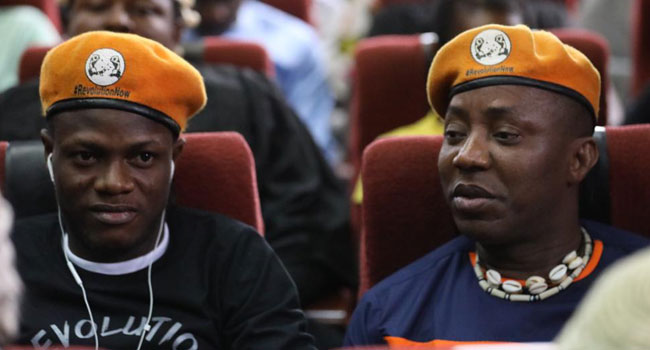 A Federal High Court sitting in Abuja has fixed March 25, 2020, for the hearing of the N1 billion fundamental rights enforcement suit filed by activist and publisher of Sahara Reporters, Omoyele Sowore, and Olawale Bakare.

The duo filed their separate suits against the Director-General of the Department of State Service, Yusuf Bichi, and the Attorney-General of the Federation, Abubakar Malami, over their alleged illegal detention, prior to their release in December 2019.

Sowore and Bakare are being prosecuted by the Federal Government on charges of treasonable felony, in November 2019.

Operatives of the DSS arrested Mr Sowore in Lagos on August 2, 2019, and Bakare in Osogbo, Osun State, on August 5, 2019, for organising a protest tagged #RevolutionNow, which the Federal Government alleged was aimed at toppling the regime of the President, Muhammadu Buhari.

At the resumed hearing of their fundamental rights enforcement suits, Justice Inyang Ekwo in separate proceedings fixed the hearing of the two suits for March 25 after granting the applications for the regularisation of some processes filed out of time by the parties.

Messrs Sowore and Bakare who were detained in the custody of the DSS from August to December 2019 are demanding N500m damages each in their separate suits.

The applicants also want the court to declare that their arrest without warrant of arrest “is illegal as it violates” their fundamental right ‘to personal liberty’.