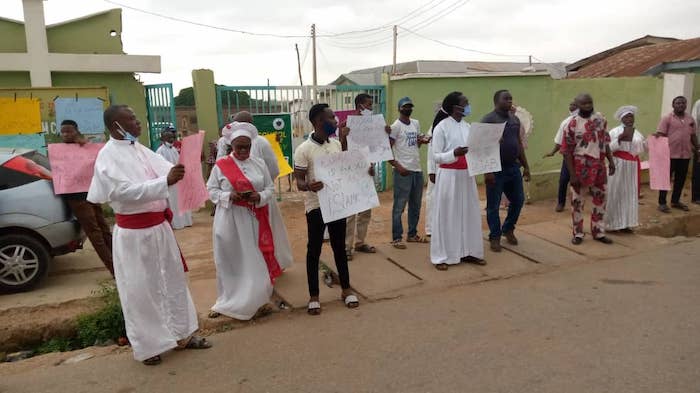 The Christian Association of Nigeria (CAN) on Tuesday kicked against a bill seeking to prohibit and prevent religious discrimination against adherents and practitioners of different faiths and beliefs.

CAN, which hosted the sponsor of the bill now before the House of Representatives, Hon. Saidu Musa Abdullahi, who visited to solicit support for the bill, said the proposed legislation if eventually passed into law, would cause chaos, confusion, division and crisis in Nigeria.

The bill, titled: “Religious Discrimination (Prohibition, Prevention, ETC) Bill 2021,” seeks to provide a mechanism for enforcing certain provisions of the Constitution 1999 as amended and other relevant national and international laws and conventions on religious freedom and tolerance.

Speaking at the meeting, the President of CAN, Rev. Samson Ayokunle, said the bill, if passed into law, would enforce discrimination rather than unite the country.

He stated that Nigeria currently has laws that can take care of discrimination, stressing that if anyone is discriminated against, the court is open.

“You don’t sit on my nose because you have a right to sit down. Beyond your good intent to solve a problem, we may be creating many other ones. There is no mutual respect,” he said.

He stated that the name of the sponsor of the bill would go into history as one who disregarded the rights of Christians to promote his own religion.

“Why do we have to wage war against ourselves? Why do we want to wake up a problem which is sleeping? Wearing of hijab has not made any student more intelligent. Piety is in the heart. In a multi-ethnic nation like ours, school uniform creates uniformity, classless. Once you pass that bill, be prepared for a state of confusion,” he said.

Ayokunle made reference to the crisis in Kwara State, saying that a legal backing to a bill would escalate the situation.

He said, ”I met with the Governor of Kwara State here in Abuja, in Aso Rock, and I told him, ‘Do you know that this problem had been before you? But the governors before you managed it with wisdom and through many other means…persuasion, getting closer to the people. Now, the problem I see in us, especially the radicalisation of religion that is now coming, which has been heating up the polity, is that there has been no Islamic school established for Western education where the Muslims who established it has not helped that community to develop. And there is no Christian institution established in any place that has not opened up that place for development. If that is at the bottom of our hearts, why do we now have to wage war against ourselves on what has been working?”

Earlier, Abdullahi had appealed to the association for support.

He said: ”We came up with a proposal which tilts towards proffering solution to the problem that has become a clog in our wheel of progress for quite a while now. A lot of people will say that religious issues are too sensitive to be discussed, but I feel that if you have a problem and you don’t talk about it, you are not likely going to have a solution to it. It is in appreciation of that that we came up with a bill, which has gone through first and second reading in the House.”

He told CAN leaders that lawmakers were not prepared for the public hearing, adding that he preferred to build consensus before going for a public hearing.