President Muhammadu Buhari has called on world leaders to strengthen relationships across borders to tackle the global threat of terrorism.

He also asked the leaders to be more forthright in intelligence sharing in order to curb the growing sophistication of terrorism.

The President made the call on Thursday in Abuja while receiving the Egyptian Ambassador to Nigeria, Mr Aseem Muhammed Hanafi Elseify, at a Letter of Credence presentation ceremony in the State House.

“Clearly the threat of global terrorism is getting more sophisticated by the day so we need leaders to work together to stop the attacks,” he said in a statement signed by his spokesman, Mr Femi Adesina.

He added that the recent attacks in some developed countries, like the United Kingdom, has clearly shown the need for stronger global collaboration and review of security architectures across countries.

President Buhari pointed out that the Boko Haram attacks within West African countries and across the borders were brought under control after concerted efforts by leaders to ensure joint operations.

He observed that bilateral relations between Nigeria and Egypt in education, training and trade had been historical, urging the new ambassador to work towards expanding and deepening the scope of the relationship. 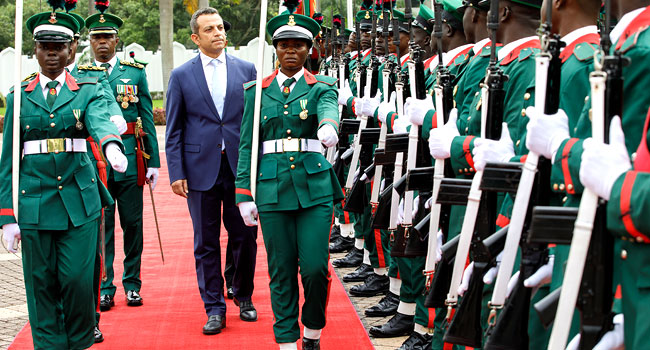 In his remarks, the Egyptian Ambassador to Nigeria said building partnership to tackle the security challenges faced by both countries would be one of his priorities.

Elseify to the President that the Egyptian government had already established a relationship with Nigerian security outfits.