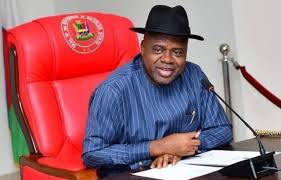 The Bayelsa State governor, Duoye Diri has filed an appeal against the Tribunal judgment which on Monday nullified the election that brought him to power.

The governor, through his chief press secretary, Daniel Alabrah in a swift reaction to the Tribunal ruling, said in a statement that he had instructed his lawyers to appeal the tribunal ruling.

Governor Diri, who spoke shortly after the tribunal ruled that the Independent National Electoral Commission (INEC) wrongly excluded the Advanced Nigeria Democratic Party (ANDP) governorship candidate from the November 16, 2019 election, said he has implicit confidence in the judiciary that he would triumph in the end.

His words: “We trust in the judiciary and we are appealing the judgement. With God on our side, we will get justice.

“This is a court of first instance and I have instructed our lawyers to file an appeal. We have a right of appeal even up to the Supreme Court.”